All the rage! the stock clerk at the liquor store said stout beers are all the rage. Hearing that, I nearly put my selection back on the shelf. i am not about the rage, but about the beer. Not that I’m a beer snob. I keep a couple of PBRs, a 6-pack of Schlitz or Old Milwaukee-as a nod to my dad-in the fridge. Sometimes cold and casual,  at least in a beer, is the way to go. doesn’t work so much for dates. Supply your own punchline here.

So, it was with some momentary reticence that I nearly put the beer neatly back on the shelf in front of him. For just an instant I pondered that act, perhaps swaggering arrogantly just a bit and remarking that I was way to cool to follow “the rage,” and that I would go home in stead to enjoy an ice-cold Mickey’s?

Oh, come on beer snobs. You’ve had a Mickey’s. Maybe late at night, when there are no witnesses. Just you and that squat, barrel-shaped green bottle with the wide mouth. Perhaps after sampling and pondering the nuances and layering, deciphering the layers of a couple imports hand crafted by Franciscans in the Alps, at some secluded 15th Century monastery/brew pub accessible only by mountain goat and Rick Steeves. After straining at descriptive adjectives like amber, sunset, or midnight to describe colors, and hoppy, roasted malts, citrusy and spices for flavor,  which is great, sometimes it is nice to trailer-trash things a bit with a simple brew that makes you feel a bit foolish for attempting at those descriptors. think of it like your Ferrari just ran out of gas and a guy in a rusted Ford pick up just rescued you from the side of the road.

Instead I pursed my lips thoughtfully and nodded politely before making my way to the check out. I set down the pint of Young’s Double Chocolate Stout in front of the cashier. She was a young and pretty, with shoulder length dark hair and  a sincere smile. I hadn’t seen her there before, and guessed that she was new. Turning the bottle to the silver and royal purple label she commented pleasantly, “Is this good? I love chocolate!”

Now there’s the right attitude, I thought. Go for what you like. Beer is supposed to be about community, and exploration in the amazing number of choices is a good thing, but we’re not pursuing the holy grail here, folks. The exploration is about finding something you enjoy, that rounds out an evening, becomes a catalyst for conversation or debate or  compliments a good meal…or is ice-cold and relaxing after a hot afternoon’s yard work. 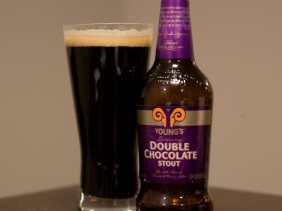 Young’s Double Chocolate Stout won the Gold Medal at the Brewing industry International Awards in 2000, and the Silver Medal in 2002. I knew that researching the beer before picking it up to try for the first time. Not that it mattered. I failed to taste any gold or silver in the beer at all! Instead, what I did find was a really nicely balanced beer. It had the essence of chocolate without being overly sweet, and just the right balance of bitterness. Midnight black(yeah, I said midnight…), it was full and rich without being too watery or too syrupy. I finished the bottle without feeling overstuffed.Young’s poured to a nice half-inch umber head. Sweeping in the aroma as the head melted slowly back into the body, I caught a hint of vanilla and caramel.

Comfortably priced, and coming in at a gentle 5.2% ABV, it was the right choice for  a frigid midwinter’s night. Full bodied dark beers with character, flavor and layers seem fitting for this time of year. Young’s Double Chocolate Stout is a great choice for cooking as well, and I can see, though I haven’t done it yet, working in a good chili or a hearty stew. I tried it with a smokey bit of sausage and cheese and found a really nice balance at that…

Listen to 900poundgorilla every Sunday morning 8-9 on Chicago’s Progressive Talk, WCPT am820 and streaming live worldwide for the Revolution and Beer show only on Our Town.

Catch the beer of the week review with 900poundgorilla’s WC Turck and Brian Murray each Sunday 8-9am only on Our Town, at Chicago’s Progressive Talk, WCPT AM and FM, and streaming online. Friend us on Facebook  at Revolution and Beer. And find all of the great beers we review each week at Louis Glunz Beer Inc., www.glunzbeers.com. And check out their fine beer glasswear selections  at the “Beerables” link  at the bottom of their page.