Batten down the hatches! If we can survive the weather channel, we’ll be all right! 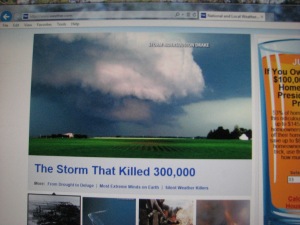 There’s a storm a brewin’, and this one’s for the books my friends. Batten down the hatches, hide the children, cover the pets, and most of all, turn off the damned weather Channel until they are once again responsible media people. Currently they are panic central. They are Geraldo Rivera in rain gear. They are the paparazzi of disaster!

What happened Weather Channel. You once gave reasoned forecasts and responsible alerts. Now you run all day and all night “Severe Weather central,” hourly “TorCon(tornado condition) Updates” and your roving paparazzi of disaster(I love that line, so I’m using it as much as I can) parading as semi-irresponsible storm chasers and veritable tragedy ghouls.

Seriously, there is a way to disseminate critical weather information without this pandering and panic. All day long yesterday we were alerted, in the most specious and hysterical manner, about the “COMING OF THE DERECHO!” That could either refer to a sudden strong thunder storm system, are a 600 foot Mexican! Either way, be afraid. Be very afraid?

Evidence the tragedy that befell several of their storm chasers in Oklahoma earlier this month. The weather channel has made a sport-not a science- of severe storm chasing. They teased all day their weather rabbit on the outskirts of Joliet last night just hoping for a tornado. Like others in the media, they are also the ones lashing themselves to posts and showing campy videos of weatherpersons being knocked about in hurricanes. And don’t think the shorter skirts went unnoticed on their cheerleader-blond weather girls-My wife noticed. My wife noticed!

The storm was a good one. On the far north side of Chicago, near the Evanston border, we got almost two inches of rain, howling winds and plenty of lightning and thunder. A barn and a truck were trashed south of Joliet and some minor damage here and there, something expected with a strong line of storms. It wasn’t the storm-ageddon decried by the weather channel.

They were once far more serious and more comprehensive. They are now sportscasters to destruction. Weather is secondary to the commercials they run. The weather is just the vehicle to get you to those commercials. But then that is the current state of all media lately. It condescends to the lowest common denominator of fear to sow unwarranted panic as a means of keeping you glued to their commercial crazy train, it’s just sad that the Weather Channel had to succumb to that level.

Catch WC Turck and Brian Murray only at RevolutionandBeer.com. Watch us every Tuesday at 7:30 p.m., and Wednesdays at 2:30 p.m., on Chicago Cable Channel 19. Please don’t forget to Like us on Facebook.

ACTIVISTS AND COMMUNITY ORGANIZERS: If you have a cause to champion, please let us know. We proudly stand with you in the important work of strengthening the grassroots support network for the city of Chicago.

BEER! Catch the Beer of The Week review with 900poundgorilla, along with weekly food pairings for our featured beers by Chef AJ Francisco and Simply Healthy Gourmet author Carole Cooper here. Find all of the great beers we review each week at www.glunzbeers.com.

W.C. Turck is a Chicago playwright and the author of four widely acclaimed books.His latest is "The Last Man," a prophetic novel of a world ruled by a single corporation. His first novel, "Broken: One Soldier's Unexpected Journey Home," was reccommended by the National Association of Mental Health Institutes. His 2009 Memoir, "Everything for Love" chronicled the genocide in Bosnia and the siege of Sarajevo. His third book "Burn Down the Sky" is published exclusively on Amazon Kindle. It was in Sarajevo at the height of the siege where he met and married his wife, writer and Artist Ana Turck. FOX NEWS, ABC, CBS News, the Chicago Tribune and The Joliet Herald covered their reunion after the war. He helped organized relief into Rwanda during the 1994 genocide. Turck has been a guest on WMAQ-TV, WLS in Chicago, WCPT, WBBM radio, National Public Radio, Best Of the Left and the Thom Hartmann show. He has spoken frequently on Human Rights, Genocide and Nationalism. In 2011, his play in support of the Occupy Movement, "Occupy My Heart-a revolutionary Christmas Carol" recieved national media attention and filled theaters to capacity across Chicago. He remains an activist to the cause of human rights and international peace. END_OF_DOCUMENT_TOKEN_TO_BE_REPLACED
This entry was posted on Thursday, June 13th, 2013 at 6:06 pm and tagged with revolution and beer. brian murray, storm, wc turck, weather channel, weather radar and posted in Uncategorized. You can follow any responses to this entry through the RSS 2.0 feed.
« ICE Raided Day Labor Corner – Press Conference Thursday at 11am at Pulaski/Foster
Revolution and Beer exclusive: The Forgotten Protest JMBG-SARAJEVO/BOSNIA and the unnecessary death of Berina Hamidovic »