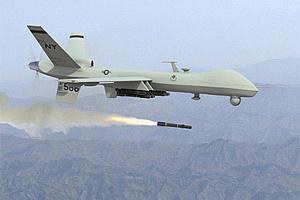 The Anti-War Committee (AWC) of Chicago opposes Boeing CEO James McNerny’s plan to make the next combat drone for the US military. Members of the committee, including several who have purchased Boeing stock, will protest at the annual stockholders meeting at the Field Museum on Monday, April 29th.

Newland Smith, stockholder and anti-war activist, cited Senator Lindsey Graham of the Armed Services Committee, on the number of casualties from killer drones. Graham recently stated, “We’ve killed 4,700.” According to Smith, “This is the estimated number of casualties in Pakistan, Somalia and Yemen, but including drone strikes in Afghanistan and Iraq would result in a much higher number.”

Smith and Sarah Simmons, also a stockholder, said that the Anti-War Committee will be at the Boeing meeting to expose the loss of life resulting from drones. “What the Obama administration says isn’t true: most of the drone strikes aren’t against proven, high level Al Qaeda leaders,” explained Simmons. “In Pakistan, as many as 881 were civilians, including 176 children. Almost all the rest are “alleged combatants.””

Boeing is competing with the other top arms manufacturers for the growing budget for unmanned aircraft for the military. This year, the Navy is asking for designs for a new combat drone. Boeing is expected to propose its “Phantom Ray.”

AWC has taken a number of measures to oppose the drone wars, including submitting a statement to a hearing being held by Senator Richard Durbin on the topic taking place on April 23rd.

In addition to the deaths caused by their products, Boeing received over $60 million in tax breaks to move to Chicago. Simmons, the mother of Chicago Public School children, spoke from her experience. “Our schools are crumbling, and we’re giving tax breaks to a company with $25 billion in defense contracts.” Smith added, “With their record profits last year, McNerny was given a 20% raise to $27.5 million. Clearly war is profitable for Boeing.”

In addition to the casualties in the countries targeted by the Obama administration, AWC points out that U.S. drone pilots are also victims of drone warfare. They experience a rate of PTSD and suicide higher than combat veterans.

Smith put it plainly. “It’s time to end the drone wars, not prepare to build another generation of more deadly weapons.”