So here’s the deal. Normally we like to take the reader on a bit of a journey, paint a picture, if you will, around the beautifully crafted beers Brian and I feature each week. Fear not. There will be a journey, of the most delicious sort, as Revolution and Beer has partnered with a brilliant young Chicago chef that you will hear much more from in the future. His name: AJ Francisco. And since we are not in the future yet, Revolution and Beer is celebrating right here and now that AJ is now part of our team.

As I am writing this, I’ve cracked the lid off a bottle of 5 Lizard, the Latin-style Witbier from our friends at 5 rabbit Cerveceria, made locally here in Chicago. Witbier, or White beer drives its name from the cloudiness of the beer from suspended yeast. Latin American and Latin-style beers are perhaps among the most underrated beers on the market. Beers like Victoria, Bohemia and Negro Modelo remain consistently good quality beers, but 5 Rabbit has set a new threshold with their well-crafted, complex brews. Nothing sets the stage to highlight their beers quite like great Latin cuisine, or vice versa.

Brian and I met AJ at a party he was catering some weeks ago. We drink beer. We eat meat, but that night AJ through together a spectacular Latin-Asian inspired Vegan faire, for the hardcore vegans at the party. The food was nothing short of amazing. Managing to corner AJ for a moment, I asked if he’d be interested in working with us. Brian and I were putting together a television show. It seemed a fateful meeting, and the perfect way to showcase AJ’s creations through pairings with great beer. AJ agreed instantly. 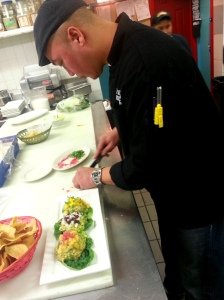 The beer poured into a weiss bier glass a cloudy golden color, that same rich color of the morning sky just as the sun cracks the horizon above Lake Michigan. It’s a rich, full, glowing color imbued with promise. The beer was crowned by an inch thick snow-white head that faded rather quickly, but without sacrificing the champagne-like carbonation. I tipped up the glass and took the first much anticipated taste.

5 Lizard, according to Aztec mythology is one of the five gods of excess. It is also the deity of dance and sexual desire. I’m not sure what that says about the beer, but I imagine this particular god kept pretty busy. I’ll admit to being a bit perplexed about the name, until AJ revealed his pairing for 5 Lizard, as well as their spicy dark ale-5 vulture. That menu screamed indulgence, and I’ll come to that shortly.

And if this feels like a bit of a tease, it absolutely is! You see, we’re damned proud of partnering with a chef like AJ Francisco. Lot’s of beer pages do pairings, often recopied from the brewer, bar food, or the ubiquitous, and dare I say, boringly obligatory sausage and cheese suggestions. This year women are helping to drive a strengthening artisan beer market, and that means food pairings. Guys will try a beer for the beer’s sake, but women are generally looking for that fuller meal experience. That’s where AJ shines!

At 4.3% ABV, it is not an overwhelmingly heavy beer, but rather is quite comfortable with a complex meal. Made with coriander, lime peel and passion fruit, is bolder and very different from other witbiers on the market. No fruit needed for 5 Lizard, but I did serve this cold, perhaps just a bit colder than the brewers recommended 39-45 degree range. The colder temp subdued the lime and passion fruit a bit and caused the coriander to pop nicely on the tongue. Which is all well and good, but how does it go with food, you might ask? AJ was worked off the coriander in the beer, and here is what evolved.

5 Lizard Latin-style Witbier was paired with a crisp Three Citrus Ceviche and fresh Sweet Scallops. AJ used the Zest and juice of fresh Lemon, Lime, & Honey Tangerines, joined by fresh Pico de Gallo. The citrus paired with 5-Lizards coriander essence marvelously and weds nicely with its tease of Passion Fruit. To round out the experience, we through another 5 Rabbit offering into the mix. 5 Vultures, Rabbit’s Dark Ale, made with a hint of chili pepper, paired perfectly with a golden brown Empanada, made with fresh Chorizo, sweet potato, raisin, & Chipotle chilies with a Roasted Poblano salsa for a hint of smokiness. This bold beer stands up to big flavors. If that ain’t worth bragging about, I don’t know what is!

Next week’s Beer of the Week gets even more interesting, as AJ flexes his culinary muscles over Asian cuisine. Stay tuned.

Check out more of AJ’s great dishes at Patron’s Hacienda http://www.patronschicago.com/. For more on 5 Rabbit Brewery checkout the link…http://www.5rabbitbrewery.com/

Catch the beer of the week review with 900poundgorilla’s WC Turck and Brian Murray each Sunday 8-9am only on Our Town, at Chicago’s Progressive Talk, WCPT AM and FM, and streaming online. And check out the weekly food pairings for our featured beers with innovative and original dishes by Chef AJ Francisco. Friend us on Facebook at Revolution and Beer. And find all of the great beers we review each week at Louis Glunz Beer Inc., http://www.glunzbeers.com