Revolution and Beer… of the week: a double shot from O’so brewing company, and the importance of silence. The clock is ticking. 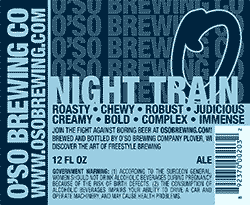 Gasp! First I noted was the snow white inch deep head, cresting a glowing golden classic pilsner hue. The colors were so perfect they almost didn’t seem real. The sool bite of citrus rose from the glass, reaffirmed in that first pleasantly hoppy taste. I was waiting for this. I’d been waiting for O’so brewing company’s Memory Lane German style Pilsner all week. Why Memory Lane for a title, you might ask? 5% from each bottle goes to fund Altzheimer’s research. Another great reason to pick this one up.

We’re Revolution and Beer, Brian and I. We love great beer, but it also means we are out in the community, engaging grassroots and activist organizations across Chicago, and Illinois. Brian, my cohost on the radio and TV show, was showing signs of that tough week at the television taping this morning. It was closing in on a 12 hour day. I tipped back that glass of Memory Lane, and with a satisfied sigh, let that first cool taste rush through me. A smile came to me. The day seemed to melt away.

A bit less than a 20 minutes from the Earth Hour observance. The observance has now made its way nearly all around the planet, with hundreds of millions joining in an hour of peace and silence, a global connection from Australia to japan, China, Singapore, Dubai, Moscow, Berlin, Frankfurt, Paris, London and New York; more than 7000 communities in 152 countries.

With a final swallow of Memory Lane, something more occurred to me. As I’m writing this, the television is on over my shoulder, tuned to the weather channel. I have a news site open on my second computer screen. There is news, weather or a talk show and noise, and more noise, and yet more layers of noise. It seems we never simply enjoy silence and darkness anymore. How much of a teasure the nights spent under the stars beside Lake Superior, or sitting on my Mother-in-laws balcony late at night in Sarajevo have become. I long for evening with my parents at their country home in rural Texas, or the waning hours of low and quiet conversation at the end of a family reunion in Iowa. I long for silence, which so often seems stolen from us.

Cracking open a bottle of O’so’s Night Train, I filled the glass, coaxing an inch deep coffee hued head. At 7.2% ABV, this Oatmeal Porter poured as black as night, that plunging depth of color softening to a reddish-umber at the edges. I breathed it in, savoring the warmth of smooth chocolate and coffee from toasted malts. I set the glass down. This one I would enjoy the moment the lights go out.

And here’s why the silence and darkness are so important to our soul. We are assailed constantly in this hyper-media world, deprived of deep and self-consoling ruminations. Thoughts are too trite here. What I am talking about are soulful musings and relective depth. Just a few moment to go here before I indulge those thoughts, coaxed and soothed in a fine glass of beer.

I’m pondering the O’so’s Night Train, but hesitate from that first taste, at least for the moment. I want to enjoy this one in peace far from the intrusion of the world. I am happy for the hour, and happier still, as if the world was giving me a gift of a moment’s peace. They seem to come fewer and fewer sometimes.

The wife calls out that there is less than a minute to go. I lift the glass and ponder the beer a moment. I am last to turn off the lights. Tipping back the Night Train, I bring the glass to my lips and with that first taste…