I got a disappointed look from someone this week when I announced, “we are not the party guys.” Revolution and Beer is about quality not quantity. We shot our first television show last week, but decided to break over St. Patrick’s Day for fear of it turning into a Girl’s Gone Wild video. There is an amatuer sense to the weekend, binge drinking of the ubiquitous and, dare I say, cliche Guiness or some cheap mass produced corporate pretense at beer, dutifully colored green.

But let’s not be overly snobby. Let’s be snobby enough to remain the standard bearer for quality beer, as well as maybe impressing a few folks. When they say, “not sure what this is, but it is green and taste vaguely of the garden hose they used to water it down with,” you can reply “I’m having a …” No need to be condescending, at least overtly condescending. You’re all about quality. Not that there isn’t a place for cheap corporate mass produced beer(?). The bubbles can really be useful in say, cleaning the inside of a particularly dirty pot.

Murphy’s Red Ale: My choice as I’m writing this particular piece. It poured into the big mug I’d picked up in Augsburg a few years ago to a beautifully rich sunset copper hue, with a smooth and contrasting pale head. Well balanced, with a grainy character, warm malts and a nicely lingering hoppiness. 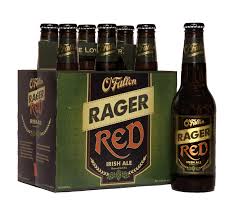 O’Fallon’s Rager Red: Smoky and earth, with caramel and spice notes. Comes in at a modest and comfortable 5.5% ABV. This one I’d have with a meal because of that fuller flavor, maybe something with a smoky pork, feta, grilled vegetables or a good brunch. 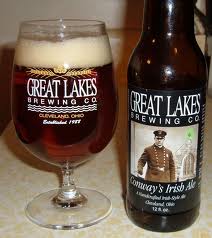 Great Lakes Conway’s Irish Ale: 6.5% ABV, pours to a beautiful light amber color, well balanced with a toasty, herbal hop flavor and an enjoyable carbonation. I haven’t had a Great Lakes Beer I haven’t enjoyed, and several of them that really make my top 20 list of great American beers.

Murphy’s Stout: Interesting, the unique character of Irish Stouts. I like this as a ready alternative to Guiness. Lighter than traditional stouts. This one pours a deep black, with a plunging and re-circulating white head. Not heavy like many stouts, with a malty sweetness, that I find is preferable to the sharpness of Guiness. I don’t do this one year round, but a four pack is chilling in the fridge now for an annual tasting as we close in on the weekend.

Smithwick’s Red Ale: After 303 years they’ve obviously been doing something right. This Irish red ale from Kilkenny, hometown of some of my ancestors, Smithwick’s lays claim to being Ireland’s oldest Ale. 4.5% ABV, this beer pours to a great foamy and fragrant head. I like getting my nose in that head and really breathing in that malty sweetness. Finished with a bit of hops at the back of the throat. Not a life changer here, but a good, consistent and traditional Irish offering.

Beer is really about community, and what encourages great conversation and regular toasts. In that regard, St. Patrick’s Day is less about the wearin’ o’ the green, as it is about the sippin’ o’ the amber, black and gold.