Revolution and Beer…of the week, Aecht Schlenkerla Rauchbier, and dreams of Bavaria

It was a perfect early autumn day, and warm, that first of what would become a half dozen trips to Munich, and nearly a dozen to Bavaria. Hotels are little more than a place to collapse at the end of the day when I travel. dumping my things on the bed in my quaint and comfortable room on Amalienstrasse, across from a little corner wine shop, I set off in reasonable haste to the English Garden.

The English garden is a bit of a misnomer. It is more a park, a gathering place of broad green fields, a study in contrasts and visions unlike anywhere else in the world. This particular day the trees still had not begun to change, their full, rich, deep green bordering the vast openness, broken only by a small creek and a small banks of low, young trees. Crowning the park, upon a small rise, the stately Monopteros rotunda. Beyond the treetops teased the skyline of Munich, a mix of modern and old world architecture. The rush and racket of busy traffic along Ludwigstrasse was hardly a murmur here.

That first breath of Aecht Schlenkerla Rauchbier from Bamberg, just north of Munich, quickly took me back to that Sunny afternoon. Schlenkerla smokebeer exudes a smoky pork essence lifting from the glass and the half inch cream-tinged head. This is the way hops were dried centuries ago, over an open flame, where they would inevitably pick up the smokiness of the fire, and perhaps anything coooking over the fire as well. This beer takes its name from that timeless process, dubbed smokehouse beer, as well as the Urbock tradition of a high alcohol content(6.6%ABV) and plenty of hops, which before refrigeration allowed shipping the beer across long distances.

I was a very poor artist, that first trip to Munich, a week off my second trip to Bosnia and the besieged city of Sarajevo. I’d arrived by train, two days on the overnight from Budapest to Prague, and the all day stunning trip through the Bohemian forest to Munich. The famous Brauhoaus was a distant desire, but I taunted a growling belly by standing in the window and inhaling the smell of roasting pork loin turning and dripping over tickling orange flames in the window.

The initial impression of this Urbock, or original Bock was reaffirmed interestingly in thetaste of smoky sweet pork nice little bitterness at the end. It was hardly overwhelming, and instead was more a character than a quality. Brian and I discovered a suprisingly complex and pleasant depth of taste to the richly colored deep umber brew. Aecht Schlenkerla Rauchbier was not at all heavy, and offered a slight tanginess that gave the overall experience a nice, balance overall. At the end, the lacing in these intricate and tattered rings in the tall mug was an art in its own right. 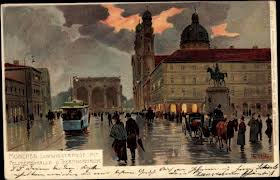 Still I could hardly shake the memory of Munich, and how I would have loved to able to afford one of those juicy pork loins at the Brauhaus. Instead, with the sun setting, I slipped into a nearby market for some cheese, deli meat, bread and a couple of beers. Marienplatz was quickly empying of tourists, the shops shuttered and closing. The fading light played golden upon the gothic revival textures of the Rathaus.

There was music playing in the dark halls and passageways beneath Feldernhalle, overlooking Odeonsplatz. The Theatinerkirche caught the last light of the day, deepening the shadows in the 19th Century Feldernhalle, or Field Marshall’s hall. A Roma girl played a lonely accordion to no one, her classical selections echoing away in the narrow passage. I settled on a bench, opened a beer and laid out the food. She smiled sweetly and played a tune to me alone. Too bashful to applaud when she finished, I motioned to the food. She took a piece of cheese, and with a quiet “Danke,” turned and was gone.

I had not thought about that moment until tasting this beer. That is the magic of a good beer like Aecht Schlenkerla Rauchbier, described one of the 50 best beers in the world. It is definitely in my top 10. But a great beer can transport you back to those perfect moments, a place and a point in time. But if you’ve never been to Munich, Schlenkerla’s Urbock Rauchbier can take you there, just enough.incidentally, the wife and I never did the Brauhaus, preferring in stead markets and little out of the way discoveries for food and drink.

Find out more about this beer: http://www.schlenkerla.de/rauchbier/beschreibunge.html

Catch 900poundgorilla’s WC Turck and Brian Murray each Sunday 8-9am only on Our Town with Mike Sanders, at Chicago’s Progressive Talk, WCPT AM and FM, and streaming online. Friend us on Facebook at Revolution and Beer. And if you have a cause to champion, please let us know as we work to become the grassroots support network for Chicago Activists and community organizers.