Have a Heart, TCF: On the frontlines of the foreclosure crisis.

It’s a miserable day in Chicago. Rain dampens the streets, gragually changing to a hard sleet on the city’s north  side. Across the street from the TCF bank branch at Southport and Fullerton,  two dozen activists representing Communities United Against Foreclosure and Eviction and Northside Action for Justice gather in the dining room of a Burger King. They are here to support Josh Pina, who is being foreclosed on by the bank.

Elliot Zashin from NorthsidePOWER explains that Pina lost his job last year, and tried repeatedly to get a modification to stay in his home but without luck. Pina did find another job, but TCF demanded thousands of dollars upfront before they would consider modification. On February 14th, despite those attempts, he is scheduled for eviction. Considering, however, the overwhelming backlog of foreclosures, and the Cook County sheriff’s hardly secret views regarding rampant misuse and even fraud by banks and lenders, Pina may be able to remain in his home for the time being. Says Zashin, who spoke with an ill Pina earlier, Josh “is living in limbo and started to pack up his things just in case.”

A week from Valentines day, the day Pina is scheduled for eviction, the activists themed the protest “Have a Heart.”

“It is not the plan for anyone to get arrested here today,” organizer Megan Selby told the gathered protesters. Quickly she outlined the action, which would culminate in a song sung to the bank officers to the tune of Simon and Garfunkel’s “Cecilia,” and a presentation of a red paper valentine heart to the branch manager.

Several more activists arrive. At precsiely 11:30 they all crossed to the bank together and quietly entered the lobby. With 900poundgorilla, a news crew arrived from the local Spanish-speaking station. 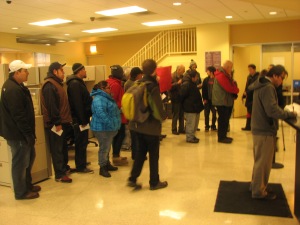 “I would request that there is to be no filming or photographs inside the bank,” branch manager, Anastasios Drankus, ordered, before turning to a presentation and plea for Pina from Selby Clearly unnerved by the media attention, Drankus ordered all filming to stop and directed an employee to diall 911.

Undaunted, the protesters then knelt chorused:

I’m begging you please save my home, please save my home.
With that, they stood and filed quietly from the bank, and back across the street. Several police units arrived shortly after, but left within a few moments, with a cursory warning for the slowly dispersing activists not to return to the bank. 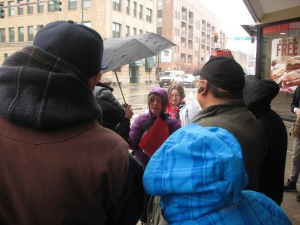 Organizer Megan Selby addresses the protesters after leaving the bank

“The nanks aren’t use to being held accountable,” said Brian Murray, a long time activist. “People don’t get in people’s faces and demand answers.”

He blames the post-war progressives who were content to just get along and not make waves. That changed during the 1960s, but even many of those leaders retreated or simply gave up. The pop psychology, escape into your mind attitude, unchecked consumerism and a corporate and entertainment dominated culture erased or reversed much of what progressives and liberals set out to accomplish in the Sixties. it sounds like a new generation has taken up that standard, So deep is the damage done to human rights, the economy and the political  system, it is impossible any longer to look the other way.

Catch 900poundgorilla’s WC Turck and Brian Murray each Sunday 8-9am only on Our Town with Mike Sanders, at Chicago’s Progressive Talk, WCPT AM and FM, and streaming online. Friend us on Facebook  at Revolution and Beer. And if you have a cause to champion, please let us know as we work to become the grassroots support network for Chicago Activists and community organizers.

Catch the beer of the week review with 900poundgorilla’s WC Turck and Brian Murray each Sunday 8-9am only on Our Town, at Chicago’s Progressive Talk, WCPT AM and FM, and streaming online. Friend us on Facebook  at Revolution and Beer. And find all of the great beers we review each week at Louis Glunz Beer Inc., www.glunzbeers.com

One response to “Have a Heart, TCF: On the frontlines of the foreclosure crisis.”