Pardon me for using the H-word: Roger Knox and the Pine Valley Cosmonauts 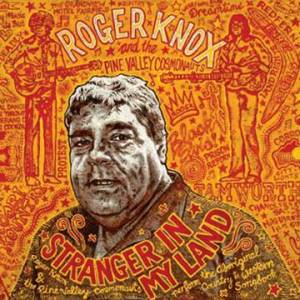 As a predominantly Progressive rock devotee, is it appropriate for me to use the H-word? I fought it all the way through a good listen to “Stranger in my Land,” the new offering from Roger Knox and the Pine Valley Cosmonauts(Bloodshot records, release Fed. 2013). So I call a buddy of mine in Melbourne, who laughed with surprise when I mentioned Roger Knox. “You should know that, mate” he chided, good-naturedly, “that’s old fashioned American Honky Tonk.” There, I hope quoting someone else softens the shock of a rock fan uttering the word “Honky Tonk” to traditional county Music fans.

I grew up on this music, the old country music story-tellers. Standing un-belted on the black vinyl seats of my father’s ’63 Pontiac, this was what he listened to devotedly. Thought I’d left that behind, mostly. But sometimes something extraordinary suprises you from the blue, and takes you back to those roots. Better yet, is when that something takes you on an unexpected journey. Better still, is when it helps you discover something deeper about yourself. That’s what happened when I gave “Stranger in My Land” a second listen.

“The Black Elvis,” my buddy offered, “the King of Kouri Country, the Aboriginal cowboy.”

The music is simple and airy; the story paramount, which is what distinguishes the album. Played solidly, with expertly crafted and eternally accessible compositions, “Stranger,” might otherwise just be another quirky overseas country offering in the vein of say Smokie from England (Living Next Door to Alice), or the exploration of American country and roots in Eastern Europe during the mid Nineties. Knox’ “Stranger” instead stands out as a masterwork, destined to become a classic, and here’s why.

The album opens with “The land where crow flies backwards, “quickly evoking a bit of Jerry Reed. It has an intoxicating, toe-tapping hook, laced with splashes of slide guitar. But this up-tempo piece offers us a glimpse into the racial divide in Australia. “Now they laughed in my face, they say I’m a disgrace, they say I got no sense, the white man took this country from me. He’s been fighting for it ever since.” But instead of a dark tale, what emerges is a deep sense of pride and obstinence.

“Stranger in my Country,” the title track, builds on that in a great beer drinkin’ country rocker. the resonance here goes far beyond Australia. What makes “Stranger” such an important piece is that transcends borders and cultures to offer itself as the anthem of the oppressed everywhere. That was most evident “Took the children away,” a ballad with a classic Cash/Carter harmony, as Knox is joined by Kelly Hogan’s smoky vocals that brought to mind Japanese internment in this country in the 1940s.
http://www.bing.com/videos/search?q=roger+knox&view=detail&mid=E01E9EE45E39786BEA5EE01E9EE45E39786BEA5E&first=0
There is a world here. There is heartbreak, defiance, politics, passion, redemption, hope and the power of the human heart to prevail, all carried upon the music. No preachiness here. That is plainly evident in the moody and bluesy “Wayward Dreams,” my personal favorite. At the end of “Stranger,” Knox returns with us to his tribal origins in “Streets of Tamworth.” By then we’re hooked, the music, rich imagery and heartfelt passions woven so indelibly into our souls amid those all too seductive melodies.

There is no weak spot here, no throw aways or fillers. Knox has crafted a lean masterpiece that makes “Stranger in this Land” far more than another collection of country songs, and which draws connections to each of us regardless of national or racial heritage.

Catch 900poundgorilla’s WC Turck and Brian Murray each Sunday 8-9am only on Our Town with Mike Sanders, at Chicago’s Progressive Talk, WCPT AM and FM, and streaming online. Friend us on Facebook at Revolution and Beer. And if you have a cause to champion, please let us know as we work to become the grassroots support network for Chicago Activists and community organizers