NRA Absurdists and Gun Proliferation in America: time to debate the Ninja Amendment?

This Sunday from 8-9am, Our Town and Revolution and Beer on Chicago’s Progressive Talk, WCPT invite you to join us for the first real and honest debate on reasonable gun control, the Second Amendment and the proliferation of guns since the Newtown tragedy. Many are calling this issue a mental health issue and not a gun issue. On both the Left and the Right the rhetoric around the mental health issue has taken a dangerous, wrong-headed, uninformed and regressive tone. The debate over guns in general has taken a decidedly perverse turn.

In fact, within a week of the Newtown tragedy, the NRA’s long awaited statement, following an unusually long silence, was in a word, absurdist. Their answer to the tragedy was not reasonable gun legislation, or even reasonable gun debate and responsibility. The NRA, instead, as a way of prevention for the next Newtown or Columbine was more guns, forcibly armed and trained school teachers, or roving gun-toting guards for every one of the nations 138,900 schools. Militarize the schools!

It is an easy sell to a knee-jerk trained populace, particularly on the Right.A trained man with a gun would certainly have a deterrent effect on a would-be gunmen intent on mayhem, right? But the money-changing marketing on the Right, like the effort by the gun-lobby and the NRA to use these stories as a way to accumulate cash through fear, is flimsy at best. That’s why they have to shout at you, or cajole you through fear and hysteria or false sincerity constantly through the Glenn Becks, Rush Limbaughs or Mike Gallaghers in the media. That’s why they have consolidated and dominated fully their concentrated and fully one-sided message in the media. Drive, as I have done many times,through the south and you will be shocked at the proliferation of pro-Rightwing propaganda, and the absolute desert of unfiltered information.

But under any reasonable thought their absurdist ramblings of the Right and the NRA fall apart quickly. For example, who will pay for the 400,000 sainted and trusted armed guards for our schools who will be necessary to guard multiple entrances, recess, open and large campuses and the fat target of would-be gunmen of masses of kids going to and from buses? Or do we require all kids entering and leaving school straight to secured vehicles to serpentine to cover? All of those armed guards will need sick days, vacation days, mandated lunches and breaks, right? Who will pay that enormous bill? More taxes? Is the Right and NRA now arguing for greater taxation? What would the tea party say?

First and foremost, the ultimate flaw in logic with the gun pimps and absurdists deals with the gunmen themselves. Not a single school gunman has been stopped or brought down by police or anyone else with a gun. They usually kill themselves, or occasionally surrender. Always the would-be gunman comes prepared to shoot, often with greater firepower, more ammunition and body armor, whereas those who may confront them are always reacting.

Perhaps then we’ll simply engender an army of volunteers. Who will oversee and screen them? What if they don’t want to volunteer anymore or one day? Do we use the unemployed as free labor? How will they look for work on school/business days? Or maybe we arm teachers. Would we then require teachers to be armed? As part of teaching degrees would they be mandated to take firearms classes, and pack a weapon to every school and every class on everyday? I could make a joke about how well-behaved classes would suddenly become, but is that the reality and environment we want our children to learn in? Talk about a loss of innocence! 20 children died at Newtown. Does the arming of every school in America now victimize its 55 milliom-that’s million students? http://www.edreform.com/2012/04/k-12-facts/

So, in keeping with that, or in keeping up with the absurdity on the Right, I am proposing what I believe to be an equally workable, and perhaps even more practical solution to the gun issue: 900poundgorilla and Revolution and Beer propose THE NINJA AMENDMENT for school safety? 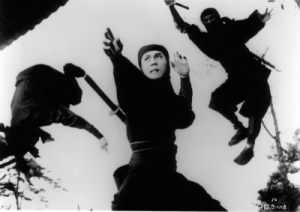 Ninja’s are all privately funded, apparently. Never have I been at a job and said, “Hey Bob, what are you doing for the weekend?” only to hear, “I’m a part-time Ninja on the weekend.” So, it would seem, there would be no liability to taxpayers. A guard with a gun is also very apparent walking the halls of our schools, whereas a Ninja would drop unseen from a ceiling, burst from a locker or spring from a trash can above, behind or beside the gunman. A gunman could likely hear return gunfire and concentrate his heavier weaponry in hallways or stairwells with little or no cover. A swarm of silent Ninja stars could drop an assailant in the blink of an eye. And there are never costly funerals for Ninjas. Ninjas take care of their own. You’ll never hear a tearful relative at a ceremony lament, “I told Dave this whole Ninja life-style would catch up with him one day, but he just wouldn’t listen.”

Share this with friends, and ask them to send this post to your Congressman and Senator in Washington, the NRA, President Obama and Vice President with a respectful demand to sponsor the Ninja Amendment if they insist on the absurdist course Washington, the Media and the NRA are currently on with regards to guns and our children.

Stay tuned for the exact wording for the proposed NINJA AMENDMENT.

Listen to 900poundgorilla every Sunday morning 8-9 on Chicago’s Progressive Talk, WCPT am820 and streaming live worldwide for the Revolution and Beer show only on Our Town with Mike Sanders.
Catch the beer of the week review with 900poundgorilla’s WC Turck and Brian Murray each Sunday 8-9am only on Our Town, at Chicago’s Progressive Talk, WCPT AM and FM, and streaming online. Friend us on Facebook  at Revolution and Beer. And find all of the great beers we review each week at Louis Glunz Beer Inc., http://www.glunzbeers.com. And check out their fine beer glasswear selections  at the “Beerables” link  at the bottom of their page.

W.C. Turck is a Chicago playwright and the author of four widely acclaimed books.His latest is "The Last Man," a prophetic novel of a world ruled by a single corporation. His first novel, "Broken: One Soldier's Unexpected Journey Home," was reccommended by the National Association of Mental Health Institutes. His 2009 Memoir, "Everything for Love" chronicled the genocide in Bosnia and the siege of Sarajevo. His third book "Burn Down the Sky" is published exclusively on Amazon Kindle. It was in Sarajevo at the height of the siege where he met and married his wife, writer and Artist Ana Turck. FOX NEWS, ABC, CBS News, the Chicago Tribune and The Joliet Herald covered their reunion after the war. He helped organized relief into Rwanda during the 1994 genocide. Turck has been a guest on WMAQ-TV, WLS in Chicago, WCPT, WBBM radio, National Public Radio, Best Of the Left and the Thom Hartmann show. He has spoken frequently on Human Rights, Genocide and Nationalism. In 2011, his play in support of the Occupy Movement, "Occupy My Heart-a revolutionary Christmas Carol" recieved national media attention and filled theaters to capacity across Chicago. He remains an activist to the cause of human rights and international peace. END_OF_DOCUMENT_TOKEN_TO_BE_REPLACED
This entry was posted on Monday, January 14th, 2013 at 3:10 pm and tagged with 2nd amendment, Aisha Chaudhri, amazon, ambush, ap, apna ghar, brian murray, Chicago's Progressive Talk radio, Chicago’s Progressive Talk, congress, constructs, crime, domestic violence, gender, gun control, guns, hurricane sandy, jason white, Lake Ontario, law, man, mike sanders, nbc, nbc news, new york, news, no gender left behind, nra, occupy chicago, Occupy My Heart: A revolutionary Christmas carol, Occupy Wall street, our town, permaculture, Politics, rape, rebecca kling, religion, revolution, revolution and beer, secong amendment, sex, sexuality, society, sustainable, Theodore Scardino, VAWA, violence against women act, wayne lapierre, wc turck, wcpt, web ster, whitehouse, whitehouse phone number, William Spengler, women, www.apnaghar.org, www.rapevictimadvocates.org and posted in Uncategorized. You can follow any responses to this entry through the RSS 2.0 feed.
« Gender and Revolution: The World from the Outside
ThoughtWorks Mourns our Beloved Colleague Aaron Swartz, Responds to MIT’s Statement »