Unemployed(sort of): a Diary-day 5, A sad farewell to Rocco the cat

The best laid plans crumble in the face of tragedy. I could use  thousand clichés here, about how when it rains, or if I wanted to be blunt when you know what hits the fan. And it seems those calamities happen at the very worst moments. That is, of course  simply a perspective. The calamities come as they will, but resonate hardest when we are the most vulnerable.

It began yesterday when the computer died. We have the smartphones, and  an old laptop, which is what I am writing this blog on. The work and job search is done much easier and more efficiently on the PC. That’s plan A I try to have a plan B, and plan C. The computer was  setback, and potentially a costly one at a time we could ill-afforded a large investment. Still we muscled through, unaware of the tragedy that would turn everything upside down this weekend. 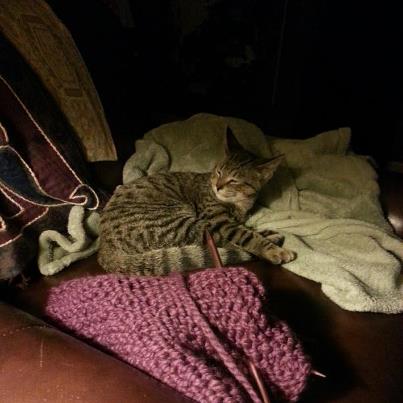 Last August we’d adopted a rescue kitty from a small shelter in The Upper Peninsula of Michigan. He was a rambunctious little kitten with this beautiful sandy red coat and pronounced deep umber stripes. Ana, whimsically, named him Reilly C. Pendergast, or Rocco for short. Don’t ask me how we arrived at either. It just sort of fit. He sat on my shoulder or in Ana’s lap most of the 8 hour drive back to Chicago. Rocco took over the house, and despite being  bit of a menace to potted plants{we came home last night to a broken planter and dirt all over the bedroom) there was something special about the little guy.

He would sit on the fridge and watch me cook most nights, and loved running water any sort. Turn on a faucet, run a tap, or water a plant and he’d come running. Rocco was curious and infinitely loving, delighting in brushing his nose against Ana’s and mine, or in slipping between the blankets at night where he would wrap his arms and legs around my calf with a purr akin to thunder. He playfully tormented Smudge, and never tired of wrestling with Oliver. This week he’d revelled in his first snow.

The one thing was, he loved to bolt out he back door and race across the yard. Now Ana and I live in a busy city neighborhood, with a bustling street on one side and train track on the opposite side. We’ve trained the other cat to stay in the yard. Rocco just never learned that lesson.

It was around 5 or so when Ana and I arrived home from shopping. Earlier in the day Mike and Brian from the radio show had offered a diagnostic on the computer  issue that seemed to make sense. I’d switched monitors earlier in the week and installed a new program, and the problem might have been a configuration issue. I was set to start working through the issue. The sun had set and I went to the patio door to grab a beer. As I opened the door Rocco bolted. He was half way across the darkening yard before I could react. 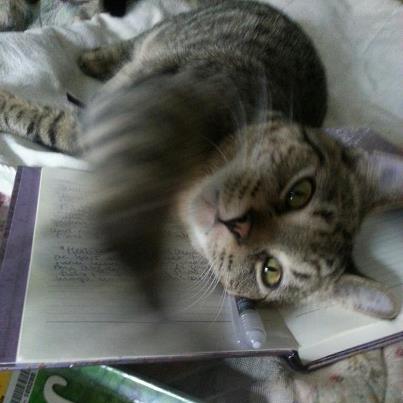 I’d learned not to chase him. Rocco loved to hide the more I chased him. I nearly caught up to him as he was crossing the alley towards the hillside and train tracks. The last I saw him he was on top of the hill, beside the fence. In the blink of an eye he had squeezed beneath the fence and was gone. By the time I reached the fence a train passed, shaking the hill, and even from 30 or so feet away was awesome.

Twenty or so yards from where he’d climbed under the fence I spied a dark shape beside the tracks. I told myself it wasn’t Rocco. Animals are caught unaware by trains all the time. Rocco hate the trains. More than once, sprinting down the alley after him, he would be rattled by the sight and sound of a passing train. My eyes strained at the dark shape beside the tracks. The umber stripes, and the fat tail he was yet to grow into caused my heart to sink.

Rocco never felt a thing. From the moment he pressed under the fence, to the time the train passed was perhaps a minute at most. He’d been thrown by the wash of the train, which broke his neck instantly. He never felt any pain. He was curled upon th rocks beside the rail, where I picked up his soft warm body and carried him home.  A bit of blood at his nose and mouth was all that seemed out of sorts. He might otherwise have been asleep. Oliver and Smudge, our other cats came out to the patio and sat beside Rocco’s lifeless body. Ana, weeping and broken-hearted placed a silly toy mouse beside him and said a tearful goodbye.

We buried Rocco with his favorite toy, and part of one of those flowerpots he’d destroyed on the hillside. There is no perspective here, except the heart struggles to carry on, and find  anchor that will allow it o carry on. It must carry on, despite loss and grief and pain. And so we will carry on, tipped up momentarily by the turning of the world and the reluctance of the heart to accept all that comes with that…

Tune in every Sunday 9-0am only on Chicago’s Progressive Talk, WCPT for the Revolution and Beer segment as Brian Murray and I sample the beer of the week with the Our Town gang, and run down the grassroots calendar for the week. If you’re tired of talk, talk, talk radio, this is do something radio. Have a beer. Get involved.

W.C. Turck is a Chicago playwright and the author of four widely acclaimed books.His latest is "The Last Man," a prophetic novel of a world ruled by a single corporation. His first novel, "Broken: One Soldier's Unexpected Journey Home," was reccommended by the National Association of Mental Health Institutes. His 2009 Memoir, "Everything for Love" chronicled the genocide in Bosnia and the siege of Sarajevo. His third book "Burn Down the Sky" is published exclusively on Amazon Kindle. It was in Sarajevo at the height of the siege where he met and married his wife, writer and Artist Ana Turck. FOX NEWS, ABC, CBS News, the Chicago Tribune and The Joliet Herald covered their reunion after the war. He helped organized relief into Rwanda during the 1994 genocide. Turck has been a guest on WMAQ-TV, WLS in Chicago, WCPT, WBBM radio, National Public Radio, Best Of the Left and the Thom Hartmann show. He has spoken frequently on Human Rights, Genocide and Nationalism. In 2011, his play in support of the Occupy Movement, "Occupy My Heart-a revolutionary Christmas Carol" recieved national media attention and filled theaters to capacity across Chicago. He remains an activist to the cause of human rights and international peace. END_OF_DOCUMENT_TOKEN_TO_BE_REPLACED
This entry was posted on Monday, January 7th, 2013 at 2:01 am and tagged with cats, grief, jobs, loss, pain, pet, revolution and beer, unempyed, wc turck, wcpt and posted in Uncategorized. You can follow any responses to this entry through the RSS 2.0 feed.
« Outrage! How Congress failed millions of victimized women, but saved Hurricane Sandy relief
Illinois House Committee Fails to Pass Corporate Tax Transparency Bill »