It’s about spirit. The first thing Ana and I did the day I got laid off was to celebrate with something positive and affirming. There is a spiritual and psychological aspect to transitioning careers, and that is exactly what it is. You are not losing a job and being cast off to a great void. This is an in between time. You’re in between careers. The only real question, and this is where the stress comes in, is how long that in between will last.

So Ana and I collect art, and we’d been eyeing this sort of odd and interesting and whimsical southwestern piece at a friend’s upscale resale shop, a little place in Chicago’s Rogers Park neighborhood called Euphoria. Gus, at the shop, called it “The Hobbit House.” 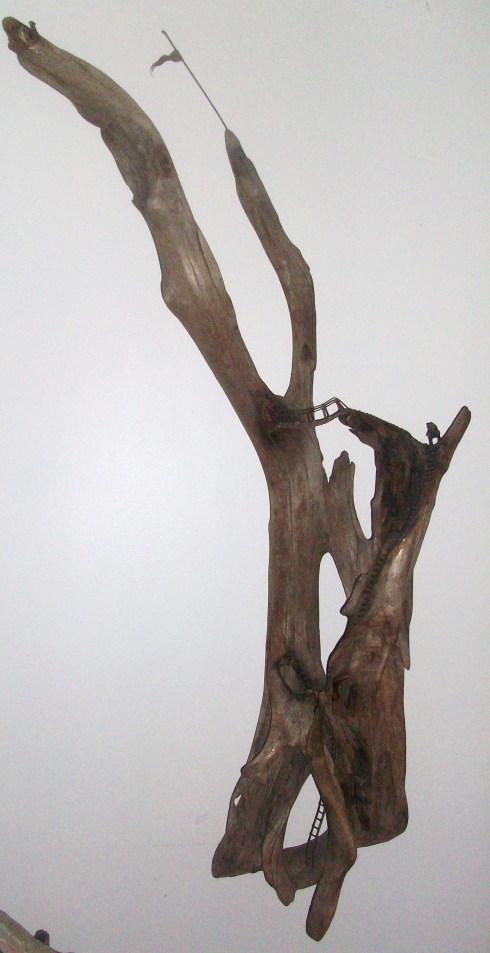 It wasn’t an expensive piece. We weren’t blowin’ the wad, so to speak, but simply setting out to define the character of this transition. It didn’t hurt, and it came as a nice surprise that Gus was having a 15% off sale as well.

Truth of it was, I had some time to think about this  bit,  and to some degree, at least as far as timing I was also an agent in the decision to stay with the project until the final day. On the radio show just before the presidential election I done an interview with a reporter in Freeport Illinois, where workers at the local Sensata plant were being thrown from their jobs after Bain Capital sold off their profitable factory to China, forcing the workers to train their Chinese replacements. Nor was I a worker at Hostess, in which management virtually looted the company then blamed the demise on unions.

The first thing I needed to get was perspective. At 50, in the current job market, and with congress’ head deeply buried up their fiscal ass, gaining a proper perspective can be daunting. The fact of it is, everything I’ve done I have done well and with passion and integrity. And I have done just about everything: Journalism, advocacy, Public Relations, Relief work for Africa, war correspondent in Bosnia, author, logistics, management, bartender, international business, union laborer, non-profit organizer, and radio host. The final week at the project my buddy from WCPT radio in Chicago, Mike Sanders, called and asked if there was anything he could do to help, and what would I like to do?

But the key was evaluating my situation. Right up there on top of that list is, obviously, the financial situation. Ana has a good job, but that allows us to tread water, and not get ahead or save, and certainly puts us in jeopardy of some unforseen calamity. The car, a nearly new Honda, is paid off. A decent severance protects us for a bit. Unemployment insurance will become a necessity for a time, but still cuts our financial margin too short for comfort. On the good  side, at least in the short-term, I know our assets (income) and liabilities (costs) to the penny. First priority; adjust the budget to reflect the new income level.

Think out of the box a bit when it come to finances. It may seem antithetical, but instead of recoiling financially, we are taking a risk on becoming a bit more aggressive about changing our financial realities.  Apart from the day-to-day of getting resumes and cover letters, and the follow-up and research required in each job query. We’ll be dissecting our complete financial existence, from the mortgage down to the grocery budget to better understand opportunities. We are moving forward. Money is an abstract and a tool. It is an odd dichotomy, but the idea that our economic realities are malleable rather than static, shifting sums of physical money is fundamental to opening the imagination to opportunities.

The next step is the toughest of all. An honest and complete self-evaluation of strengths and weaknesses is critical. Like any issue in every business environment we have one of two choices, that is to be reactive or proactive. Without a doubt a prospective employer will hit upon a weakness  during the interview process. Not that weaknesses, necessarily are some crippling or shameful affliction. We all have weaknesses. The interviewer will have weaknesses. The key is that you understand your weaknesses and have a plan, a pro-active plan for working on, around or past those weaknesses. I think back over jobs and job interviews, and it was my summation and direct confrontation of my own weaknesses that was as important  as the skills the employer was looking for. Proactive rather than reactive.

There was  one more thing I resolved not to do during this in between period. It came to me on the way to a strategy meeting for the HelpHouseChicagoHomelessPeople 501c3 I helped start. We’d just gotten word that Bank of America is liquidating hundreds of foreclosed homes in Chicago from their books. But throughout the meeting I had this nagging thought that I could luxuriate with a nap later on that afternoon. The thought was seductive. Ana was at work. The house would be quiet, but such thoughts are a trap. And if I do it today, I will do it tomorrow, and the next day and the…

Instead, I went home and built an excel spread sheet to begin the job search in an organized and methodical way. More on that tomorrow…

Listen to 900poundgorilla every Sunday morning 8-9 on Chicago’s Progressive Talk, WCPT am820 and streaming live worldwide for the Revolution and Beer show only on Our Town. If you’re tired of talk, talk, talk radio, this is do something radio. Have a fine beer. Get involved.

Catch the beer of the week review with 900poundgorilla’s WC Turck and Brian Murray each Sunday 8-9am only on Our Town, at Chicago’s Progressive Talk, WCPT AM and FM, and streaming online. Friend us on Facebook  at Revolution and Beer. And find all of the great beers we review each week at Louis Glunz Beer Inc., www.glunzbeers.com. And check out their fine beer glasswear selections  at the “Beerables” link  at the bottom of the page.

W.C. Turck is a Chicago playwright and the author of four widely acclaimed books.His latest is "The Last Man," a prophetic novel of a world ruled by a single corporation. His first novel, "Broken: One Soldier's Unexpected Journey Home," was reccommended by the National Association of Mental Health Institutes. His 2009 Memoir, "Everything for Love" chronicled the genocide in Bosnia and the siege of Sarajevo. His third book "Burn Down the Sky" is published exclusively on Amazon Kindle. It was in Sarajevo at the height of the siege where he met and married his wife, writer and Artist Ana Turck. FOX NEWS, ABC, CBS News, the Chicago Tribune and The Joliet Herald covered their reunion after the war. He helped organized relief into Rwanda during the 1994 genocide. Turck has been a guest on WMAQ-TV, WLS in Chicago, WCPT, WBBM radio, National Public Radio, Best Of the Left and the Thom Hartmann show. He has spoken frequently on Human Rights, Genocide and Nationalism. In 2011, his play in support of the Occupy Movement, "Occupy My Heart-a revolutionary Christmas Carol" recieved national media attention and filled theaters to capacity across Chicago. He remains an activist to the cause of human rights and international peace. END_OF_DOCUMENT_TOKEN_TO_BE_REPLACED
This entry was posted on Thursday, January 3rd, 2013 at 4:19 pm and tagged with 900poundgorilla, art, bain, brian murray, Chicago’s Progressive Talk, euphoria, freeport, helphousechicagohomelesspeople, jobs, mike snaders, our town, progressive, revolution and beer, rogers park, sensata, society, unemployment, wc turck, wcpt, work and posted in Uncategorized. You can follow any responses to this entry through the RSS 2.0 feed.
« DECLARATION ON THE NEED FOR A MORATORIUM FOR THE 11.1 MILLION UNDOCUMENTED-today at 12:30
Revolution and Beer…of the week: Young’s Double Chocolate Stout »