To Henry and Lindsay 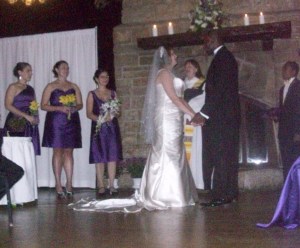 It is a measure of a life that the world changes for the better. It is the ultimate measure, because we all  are contributors to that better world. That brings a certain responsibility; A very certain one. By that standard, what have each of us contributed to a world better than the one we arrived to find? There is your question. There is the summation we all must make before God, before eternity, and within our own hearts.

Like each of us, my summation to that eternity is ever-changing. I struggle within my own heart, and struggle deeply. But I understand the storms in my heart do indeed resonate in the world, just as love resonates and resonates strongest of all. And so when defining what it is I want in the world most often I reply justice, knowing full well that there is no justice in the world without love.

Last night, in a warm and peaceful ceremony at the Starved Rock lodge Ana and I joined to celebrate the marriage of two dear friends, Henry and Lindsay. surrounded by the autumn woods painted among the deep canyons of the park, carved by the ages and the mighty Illinois River  adjacent. An autumn wind  raged outside the tall windows of the lodge, pushing showers of golden and umber leaves against the windows,  symbolic of our own lives pushed and pulled by the winds of the world.

There is justice in the world. It comes, but it does not come by itself. Like a fine dish, or a good wine or a providing garden, it must be coaxed and nurtured and cared for. It must be defended to realize that fuller and better potential. It must improve what was there before: a lifeless patch of ground,  a bushel of grapes or un-realized spices. At times it must be fought for, by standing firm against the forces eschewing love and justice.

Henry and Lindsay were married with a simple few words and a symbolic kiss. But there is a history in that kiss, far beyond the two of them, one that speaks to that better world, and for those precious moments in that softly lit lodge, among their family and friends, I was moved to have been a part of it.

W.C. Turck is a Chicago playwright and the author of four widely acclaimed books.His latest is "The Last Man," a prophetic novel of a world ruled by a single corporation. His first novel, "Broken: One Soldier's Unexpected Journey Home," was reccommended by the National Association of Mental Health Institutes. His 2009 Memoir, "Everything for Love" chronicled the genocide in Bosnia and the siege of Sarajevo. His third book "Burn Down the Sky" is published exclusively on Amazon Kindle. It was in Sarajevo at the height of the siege where he met and married his wife, writer and Artist Ana Turck. FOX NEWS, ABC, CBS News, the Chicago Tribune and The Joliet Herald covered their reunion after the war. He helped organized relief into Rwanda during the 1994 genocide. Turck has been a guest on WMAQ-TV, WLS in Chicago, WCPT, WBBM radio, National Public Radio, Best Of the Left and the Thom Hartmann show. He has spoken frequently on Human Rights, Genocide and Nationalism. In 2011, his play in support of the Occupy Movement, "Occupy My Heart-a revolutionary Christmas Carol" recieved national media attention and filled theaters to capacity across Chicago. He remains an activist to the cause of human rights and international peace. END_OF_DOCUMENT_TOKEN_TO_BE_REPLACED
This entry was posted on Sunday, November 11th, 2012 at 11:04 pm and tagged with brian murray, henry brown, justice wcpt, Love, marriage, relationships, revolution and beer, wc turck and posted in Uncategorized. You can follow any responses to this entry through the RSS 2.0 feed.
« Join the Post Repulican discussion tomorrow 8-9am CST online or on the air at WCPT am820 during the “Revolution and Beer” segment, or friend me on Facebook at “Last Man” to add your own thoughts that I will happily post and share with readers and listeners. Call into the show at 773-763-9278.
Springfield Lobby Day for Corporate Tax Transparency Tuesday, November 27, 2012 7:00am-7:00pm »