21 Days in May: an Occupy novella, party twenty-eight

“There’s fucking cops dressed as protesters in the crowd!” Blaze heard one of the Black Bloc guys exclaim from where he sat beneath a tree in the median. Hardly twenty, the Black Bloc guy wore the ubiquitous baggy black clothes and a paint spattered pair of worn combat boots. Wavy, sandy-blond hair tumbled from beneath a plastic “V for Vendetta” mask. He was tall and sinewy, his body squared a bit by a homemade body protector beneath a baggy black tee-shirt. A red and white checkerboard bandana covered the bottom half of his face. Ski goggles dangled at his neck. In a backpack over one shoulder he carried a bottle of vinegar and a large bottle of water, both needed to counteract chemical agents like pepper spray and tear gas.

“I just saw two cops change clothes,” he continued, “and enter the protest with a couple of bricks.”

“Lock arms!” someone shouted, as better than fifty demonstrators formed something of a wall. Behind them, the Black Bloc people, perhaps no more that a dozen or fifteen, hardly the army of despots the media frightened the public over, collected as a tight group, crouched or sitting on the ground to prevent any immediate infiltration. Nearby, the taunting and teasing of a line of riot police grew with the mounting tensions.

It was far less than the media and police spokespersons would later claim. Most of the banter from demonstrators were reminders that they too were working class, and that their livelihoods and families were just as threatened. Not that any of that fell on deaf or indifferent ears, but rather upon ears that were steeped in propaganda and an us-versus-the-world mindset, or who were caught in an impossible situation somewhere between their immediate livelihoods and that of a dictatorial system slowing strangling their future.

On Michigan, two blocks south of the stage better than a hundred State Police climbed out of three greyhound buses. They were far more aggressive than their Chicago counterparts, and eager for a fight. They held two dogs against the protesters, drawing ranks against the still peaceful demonstrators, allowing no one to leave. They purposely agitated the dogs, seeming to enjoy the fear it instilled against students, grandparents, journalists and parents with children. Not content with their police-issue batons, some of the State Police sported longer, thicker sticks, capable of inflicted far more damage and much more pain. 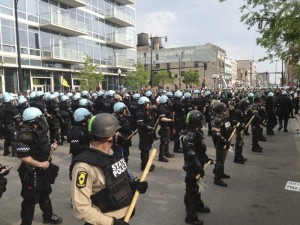 For one Hungarian woman, it brought back recollections of the Soviet occupation when she was a child.

Amid all of this, Blaze and Rebel Rose sat on the ground cross-legged and leaning against one another back to back. Their laptops were open. Both of them were working furiously on different pieces of the same project. Quite purposely the pair had inserted themselves between a television camera crew and a French reporter live-streaming the protest

He and Rose were furiously trying to upload into the various available connection networks the video Eva and her uncle had of Congressman Rand. He wasn’t having any luck, and something told him it wouldn’t work. Blaze also understood that if it didn’t Jack stood little chance at all.

Eva was somewhere in the crowd, pushing through the crush of thousands of bodies, the upraised arms, fingers risen in peace signs or holding camera phones and cameras. It felt to her like fighting her way through a pulsing, moving forest. She was looking for Jack, wanting to be with him when Blaze and Rose uploaded the video to thousands of phones  at once. But it seemed utterly hopeless. She checked her phone. It was almost four, and almost time for the upload. Beside the stage a line of mounted police drew tighter ranks and edged towards the crowd. She pressed on, pleading with people, begging forgiveness as  she pushed through the reluctant and at times unyielding bodies. And now there was something new. The tension and tempo of the moment built towards a violent crescendo. It whipped through the thousands of demonstrators like a virus. They were being trapped, surrounded and enclosed from all sides.

Angelo waited for the right moment. He waited for the predictable chaos to follow when he could expose Jack and slip away into the confusion. Behind them a double rank of riot police marched into the heart of the demonstrators. West of the intersection, the cerulean police riots helmets fully outnumbered civilians. On command the police moved in, without provocation, without reason, and for no other purpose than to punish those who stood from freedom against the emerging police state of America, and to crush the inclination to challenge the decided authority of the nation. These officers, by purpose or circumstance had abandoned their individual oaths, pressing forcefully against fellow citizens as mindless automatons to their bartered government.

Now the opposing sides were face to face, squared off in places, cornered and terrified in  most others. Still the police pressure continued, their lines inching forward, compelling emotions, stoking anger, inciting the trapped. Within the steadily shrinking pocket some pleaded, others accused, still others, like the Black Bloc rose to  stand against this tyranny, and when there was nowhere else to go, when they were crushed together, the demonstrators pushed back.

It was the trigger the police had been waiting for, for which they fully anticipated, and which they plainly and purposely provoked. A roar swept through the demonstrators, a chorus of fear and anger and defiance. In small pockets fists were thrown against swinging batons.

The melee still had not erupted full force when Eva spotted Jack not twenty yards away. A line of police pressed towards him steadily. Behind Jack, Angelo shoved him forward, straight  at the police. She checked her phone and strained across the wild mass of humanity to the place she’d left Blaze and Rebel Rose. They were late, her phone silent. She had a sinking feeling that it was too late. When she looked again to Jack and Angelo,,,they were gone.

W.C. Turck is a Chicago playwright and the author of four widely acclaimed books.His latest is "The Last Man," a prophetic novel of a world ruled by a single corporation. His first novel, "Broken: One Soldier's Unexpected Journey Home," was reccommended by the National Association of Mental Health Institutes. His 2009 Memoir, "Everything for Love" chronicled the genocide in Bosnia and the siege of Sarajevo. His third book "Burn Down the Sky" is published exclusively on Amazon Kindle. It was in Sarajevo at the height of the siege where he met and married his wife, writer and Artist Ana Turck. FOX NEWS, ABC, CBS News, the Chicago Tribune and The Joliet Herald covered their reunion after the war. He helped organized relief into Rwanda during the 1994 genocide. Turck has been a guest on WMAQ-TV, WLS in Chicago, WCPT, WBBM radio, National Public Radio, Best Of the Left and the Thom Hartmann show. He has spoken frequently on Human Rights, Genocide and Nationalism. In 2011, his play in support of the Occupy Movement, "Occupy My Heart-a revolutionary Christmas Carol" recieved national media attention and filled theaters to capacity across Chicago. He remains an activist to the cause of human rights and international peace. END_OF_DOCUMENT_TOKEN_TO_BE_REPLACED
This entry was posted on Saturday, May 26th, 2012 at 2:39 am and tagged with 21 days in may, 5th congressional district, ABC, activism, AM560 WIND, am890, black bloc, Bruce springsteen, Cermak, Chicago, chicago police, derivatives, Economy, fiction, FOX News, garry mccarthy, http://www.youtube.com/watch?v=TudIyxxAboA, james fritz, Jamie kilstein, john cody, jpmorgan, marriage, marshallstern, matt sedillo, Mayne stage, mike sanders, nancy wade, nato summit, occupy, OCRAC, poetry, poetry slam, police superintendent, Politics, protest, springsteen, The Last Man, thunder road, W.C. Turck, wade in congress, wbbm, wcpt, WIND, wls and posted in Uncategorized. You can follow any responses to this entry through the RSS 2.0 feed.
« 21 Days in May: an Occupy novella, part twenty-seven
21 Days in May: an occupy Novella, part twenty-nine »