Advance offering of The Last Man, by W.C. Turck and the 99%, cover design by Brian Murray, now available on Amazon Kindle ebook. The first Occupy novel from the writer/producer of Occupy My Heart: a revolutionary Christmas Carol 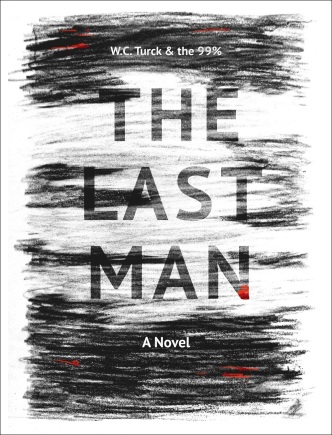 The Last Man. This is what happens if Occupy fails. we can’t fail. Buy the book. Support the movement. All royalties go to occupy Chicago. Show the world the power of this movement. Stay tuned. Printbook and additional formats coming soon. Key words: W.C. Turck, The Last Man

The Last Man coming to the stage? Stay tuned for details.

W.C. Turck is a Chicago playwright and the author of four widely acclaimed books.His latest is "The Last Man," a prophetic novel of a world ruled by a single corporation. His first novel, "Broken: One Soldier's Unexpected Journey Home," was reccommended by the National Association of Mental Health Institutes. His 2009 Memoir, "Everything for Love" chronicled the genocide in Bosnia and the siege of Sarajevo. His third book "Burn Down the Sky" is published exclusively on Amazon Kindle. It was in Sarajevo at the height of the siege where he met and married his wife, writer and Artist Ana Turck. FOX NEWS, ABC, CBS News, the Chicago Tribune and The Joliet Herald covered their reunion after the war. He helped organized relief into Rwanda during the 1994 genocide. Turck has been a guest on WMAQ-TV, WLS in Chicago, WCPT, WBBM radio, National Public Radio, Best Of the Left and the Thom Hartmann show. He has spoken frequently on Human Rights, Genocide and Nationalism. In 2011, his play in support of the Occupy Movement, "Occupy My Heart-a revolutionary Christmas Carol" recieved national media attention and filled theaters to capacity across Chicago. He remains an activist to the cause of human rights and international peace. END_OF_DOCUMENT_TOKEN_TO_BE_REPLACED
This entry was posted on Monday, January 30th, 2012 at 4:26 am and tagged with amazon, books, corporations, fiction, kindle, occupy, occupy chicago, occupy oakland, philosophy, The Last Man, theater, W.C. Turck and posted in Uncategorized. You can follow any responses to this entry through the RSS 2.0 feed.
« Top 200: The Rise of Corporate Global Power by Sarah Anderson and John Cavanagh, Institute for Policy Studies
Venice Italy Travel Tip: Buy a vaporetto pass for the as long a period as you need; 12, 24, 36, 48, 72 hour, 7 day for 50Euro. Aliliguna is the biggest, but you cannot ride ACTV with an Aliliguna ticket. Check schedules and details at the window carefully…you are in Italy. Buy tickets in Mestre at the train station or at the airport terminal. Unlimited rides, including the buses on Lido »