Staging a protest — on a makeshift stage: Outdoor reworking of ‘A Christmas Carol’ makes use of actors who have been drawn into the protest movement

The audience members began to arrive, walking behind a man carrying a sign reading, “Where are the jobs created by the tax cuts for the wealthy?”

Occupy Chicago was putting on a show. 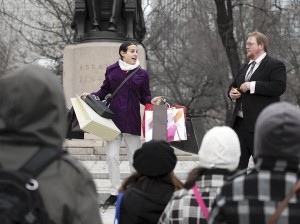 The set was ready. In front of the memorial to Abraham Lincoln in Grant Park, a bench was hammered onto pieces of plywood to keep it from being blown over. Rolling wardrobes on the sides were anchored against the wind by backpacks. Scene lists were duct-taped to the tall columns on each side.

“I like that Abe Lincoln is looking over us,” said Teresa Veramendi, looking up at the president’s somber, seated figure. “I think he would approve.”

On a cold, snowy Christmas Eve, an ambitious Chicago banker loses his job and his money-hungry girlfriend, encounters a former love who is part of the Occupy movement, is visited by three spirits who show him painful truths, and finds redemption.

“It really stays pretty true to the classic Dickens tale of somebody who has sold out all their values to the pursuit of money and isn’t really happy,” said Zach Johnson-Dunlop, 28, who plays the banker.

The action is set amid a protest, and last week it was seen by audience members who had just come from one. The premiere — a single outdoor performance Friday afternoon — was coordinated to begin at the end of a protest march that set out from LaSalle and Jackson.

The actors gently shooed away a man who had walked on stage to take close-up pictures of what he thought was a real TV newscast but was actually part of the show. And one Occupy regular kept joining the actors portraying protesters in the show.

Turck conceived of the play just before Thanksgiving. As he attended Occupy Chicago’s general assemblies, he was struck by how many theater people he was meeting.

“I thought, ‘Boy, if we could channel this talent, there’s no better form of communication, heart to heart, than art,'” he said.

Christmas was a little more than a month away. And Turck happened to be a great fan of Dickens.

“On DVD somewhere, I’ve got just about every version of ‘A Christmas Carol,'” he said.

Turck had his concept. He banged out the script in a week, returned to Occupy’s general assembly “and tried to convince people I was sane.”

“He jumped up and said, ‘I have written a play,'” said Veramendi, 26, an actress who teaches theater in Chicago schools. “People were very excited. … Everyone cheered.

“It’s a great vehicle to get people interested and to bring more people into the conversation who might not come out to a protest — but who might come to a play.”

Friedman, 22, who has been an assistant director and stage manager at Lookingglass Theatre Company, Piven Theatre Workshop and Chicago Dramatists, saw a notice on a Chicago theater website asking for actors and a director for an Occupy play. She met with Turck and Veramendi.

“I got a chance to read the script, and I really liked it a lot,” Friedman said. “He’s taken this classic — it’s almost become an icon in American culture — and turned it into a revolutionary story.”

Turck’s version differs in one important respect. “Our banker, Josh, is a likable character. He’s not Scrooge,” he said. “His arguments are compelling.

“We tried to be very realistic. We didn’t want to be cartoonish. We really wanted people to think.”

On Friday, actors changed costumes — all of which included coats — on stage, in the open. No one used mics, and though traffic hummed, sirens yowled and trains whistled, the actors generally made themselves heard.

The audience, standing behind or sitting on the steps up to the memorial, chanted along with the play’s protesters and tried to stay warm. One young man passed out chemical hand warmers; another, cookies.

At the end, people wiggled upward-raised fingers, an Occupy expression of approval, and gave enthusiastic reviews.

“It was funny, but it also had real events and actions. And I liked the turnaround of the main character,” said Ryan Griffin, who added powerful praise for an outdoor performance in winter:

“I was really getting cold, and I wanted to get out of here. But I really wanted to see the play.”

A radio play the cast recorded was to be broadcast at 10 a.m. Saturday on WCPT, 820 AM, during Marshall Stern’s “Awakened America” program. A podcast of the show was scheduled to be posted soon at bit.ly/uH3oBb.

W.C. Turck is a Chicago playwright and the author of four widely acclaimed books.His latest is "The Last Man," a prophetic novel of a world ruled by a single corporation. His first novel, "Broken: One Soldier's Unexpected Journey Home," was reccommended by the National Association of Mental Health Institutes. His 2009 Memoir, "Everything for Love" chronicled the genocide in Bosnia and the siege of Sarajevo. His third book "Burn Down the Sky" is published exclusively on Amazon Kindle. It was in Sarajevo at the height of the siege where he met and married his wife, writer and Artist Ana Turck. FOX NEWS, ABC, CBS News, the Chicago Tribune and The Joliet Herald covered their reunion after the war. He helped organized relief into Rwanda during the 1994 genocide. Turck has been a guest on WMAQ-TV, WLS in Chicago, WCPT, WBBM radio, National Public Radio, Best Of the Left and the Thom Hartmann show. He has spoken frequently on Human Rights, Genocide and Nationalism. In 2011, his play in support of the Occupy Movement, "Occupy My Heart-a revolutionary Christmas Carol" recieved national media attention and filled theaters to capacity across Chicago. He remains an activist to the cause of human rights and international peace. END_OF_DOCUMENT_TOKEN_TO_BE_REPLACED
This entry was posted on Wednesday, December 28th, 2011 at 4:21 pm and tagged with agnes otap, arts, babur balos, barbara brotman, broken, community, donier tyler, economics, emma casey, Everything for Love, hannah friedman, K. Hannah Friedman, keith glab, occupy, occupy chicago, Occupy My Heart: A revolutionary Christmas carol, Occupy Wall street, peace, Politics, rebecca cling, rich logan, society, teresa veramendi, theater, tim caldwell, W.C. Turck, zaxhary dunlop and posted in Uncategorized. You can follow any responses to this entry through the RSS 2.0 feed.
« 12.23 – 12.29 Occupy My Heart: A Revolutionary Christmas Carol
WARNING: Explicit Language on Unions/FOX and Idiots »