A Night in Jail: An Occupy Chicago story

Congress shall make no law respecting an establishment of religion, or prohibiting the free exercise thereof; or abridging the freedom of speech, or of the press; or the right of the people peaceably to assemble, and to petition the Government for a redress of grievances.

Six kids charged across Jackson Street in the heart of Chicago’s loop just before 9 this morning. It was raining and cold, under steely gray skies brushing the tops of surrounding skyscrapers, in stark contrast to the near perfect weather for a protest through the streets to the Lakefront the night before, Fourteen hours earlier 3000 peaceably assembled and marched for a redress of significant grievances. 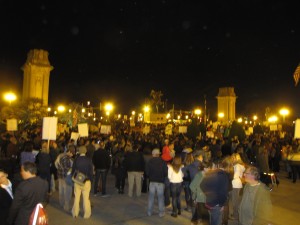 An estimated 3000 turned out on Chicago streets. Photo by 900poundgorilla

Splashing through gathering puddles reflecting that tattered sky their relieved laughs and ebullient “Yeahs!” resounded among the empty towers, echoing off among the streets. Waiting for them were a dozen or so friends manning a soggy ramshackle base of sorts on the sidewalk in front of the Bank of America building.

The kids, ranging in age from their late teens to their early twenties were wired from a long sleepless night in the lock up, courtesy of the Chicago Police, and were excitable at their newly regained freedom. But it hardly felt to any of them as punishment, but rather a victory. Theirs was pride rather than shame. They’d asserted their rights under the Constitution, and the authorities had shown their disrespect, or worse, systemic ambivalence to those guiding principles.

One of them was a tall skinny kid named Justin, with string black hair that chronically tumbled into his brown eyes. Justin was dressed in black and anxiously fumbling with a big cigar he’d just purchased to celebrate his first time in jail for a cause. He’d stood for something. He’d stood against something. he’d challenged an injustice, which is why going to jail for the night over a local statute that fundamentally is unconstitutional was a matter of pride.

Behind him, a girl with pink hair waved her plastic handcuffs triumphantly. Justin was starving, having had only a plain baloney sandwich in the lock up . One of the other girls, pulling a white plastic rain poncho over her head, who’d been arrested in an earlier protest groaned about the baloney.

“Know what they do with that in the morning for breakfast?” she laughed, “They chop it up and put it in this watery brown gravy for breakfast. Its disgusting!”

Justin slurped a few sips of a power drink someone handed him. “I have two jobs. I work for a corporation. Isn’t that funny? I was supposed to be at work at eight, but that’s when I got out of jail.”

He was rubbing his wrist where the police had placed the plastic cuffs the night before, arresting him for not vacating the park when it was declared closed in violation of a controversial and unconstitutional city ordinance abridging his First Amendment rights to peaceably assemble and to redress of grievances. 175 in all were arrested and taken to the First District station for the night before being released. 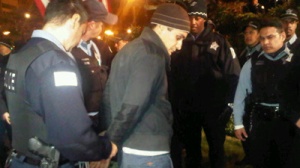 “No, the cops were great,” said Justin. “They told us politely they would arrest us if we didn’t leave. There was no violence. It was all very peaceful. They said the fine was $120, but was being waved.”

All the protesters were  released without charge.

By now the rain was letting up a bit. It patted upon the blue plastic sheeting and an umbrella sheltering several of the protesters in their would-be base, evoking images of the Civil Rights activists occupying the national mall a generation before. In Washington DC a dedication of Martin Luther King’s memorial was just getting under way. It is difficult to miss similarities in the two historic movements, unless that is the original intention. Justin was clear about his reasons for being here.

“For me, I’m out here for the people. I’m out here to help people. I’m trying not to be selfish and think of people suffering more than me. I get out here when I can. I work six days a week, so it isn’t the easiest thing.”

W.C. Turck is a Chicago playwright and the author of four widely acclaimed books.His latest is "The Last Man," a prophetic novel of a world ruled by a single corporation. His first novel, "Broken: One Soldier's Unexpected Journey Home," was reccommended by the National Association of Mental Health Institutes. His 2009 Memoir, "Everything for Love" chronicled the genocide in Bosnia and the siege of Sarajevo. His third book "Burn Down the Sky" is published exclusively on Amazon Kindle. It was in Sarajevo at the height of the siege where he met and married his wife, writer and Artist Ana Turck. FOX NEWS, ABC, CBS News, the Chicago Tribune and The Joliet Herald covered their reunion after the war. He helped organized relief into Rwanda during the 1994 genocide. Turck has been a guest on WMAQ-TV, WLS in Chicago, WCPT, WBBM radio, National Public Radio, Best Of the Left and the Thom Hartmann show. He has spoken frequently on Human Rights, Genocide and Nationalism. In 2011, his play in support of the Occupy Movement, "Occupy My Heart-a revolutionary Christmas Carol" recieved national media attention and filled theaters to capacity across Chicago. He remains an activist to the cause of human rights and international peace. END_OF_DOCUMENT_TOKEN_TO_BE_REPLACED
This entry was posted on Sunday, October 16th, 2011 at 5:41 pm and tagged with bloomberg debates, Chicago, code pink, conservative, Constitution, Culture, dancing with the stars, dartmouth college, Economy, Everything for Love, FOX News, gay marriage, glenn beck, Godfather’s Pizza CEO Herman Cain, government, hal sparks, history, http://www.ustream.tv./channel/halsparkslive, human rights, liberal, Love, medea benjamin, media, Mortgage Banker’s Association, nancy grace, new hampshire debate, New Jersey Gov. Chris Christie, newt gingrich, Obama, occupy chicago, Occupy Wall street, Perry under pressure at Republican debate, Politics, postal workers, progressive, racism, randi rhodes, relationships, religion, republican, rick perry, rick perry for president, rush limbaugh, society, Stand up chicago, stephanie miller, steve jobs, tea party, teachers union, terrorism, texas, The Hal Sparks Radio Program (megaworldwide, thom hartmann, W.C. Turck and posted in Uncategorized. You can follow any responses to this entry through the RSS 2.0 feed.
« On the front lines with Occupy Chicago
Emmetsburg: Excerpt from upcoming novel on Amazon Kindle »