That’s what we’re talking about!

From my office on the 17th floor of the Willis Tower I heard a marching band, a freakin’ marching band. Rushing to the window I watched the parade of kids in green and orange uniforms turning the corner onto Jackson. What is more American than a marching band? I laughed, literally laughed and believed-really believed for the first time that we the people might actually win this thing. By grace and god and the stalwart determination of the protesters it is possible to reign in corporations that have ransacked, bullied and raped the government, the people and the world. Wow, a marching band! 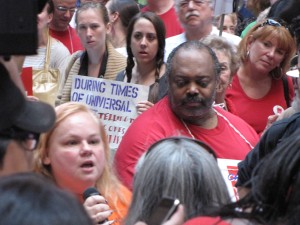 If that wasn’t enough, other citizen activists arrived by kayak down the Chicago river. Teachers and educators caravan-ed, gathering by the hundreds at the La Salle street location for their part in what amounted to a peaceful five-pronged invasion of Chicago’s Loop. Hundreds of Postal Workers formed up at Adams and Monroe.

Joined by Standup Chicago, the Teachers Union, Postal Workers, and an array of social justice and activist organizations, Occupy Chicago marched on the Art Institute along Michigan Avenue where the Mortgage Banker’s Association was holding their Annual Convention, which given their responsibility in the current crisis might have been more appropriately held in a funeral home.

Students are the anchor to the movement, allowing for a constant occupation day and night as Occupy Chicago enters its 3rd week

Joining the Teachers and Standup Chicago in a square below the Chicago Board of Trade, I found the air electric, charged by outrage at the plunder of the nation by a relative few, but also by an amazing turn out that would later culminate in a group of between 4 and 6,000.  But there was a spirit of community and neighborliness in the crowd, and a sense that we were all in this effort together, from the homeless activists, to middle class families, retired people, students, professors and blue-collar workers. There were the employed, the under employed and unemployed citizens, all bound by a common faith that together they could change the course of the nation and that together they would help those suffering the most from corporate and Wall Street greed and corruption.

So much for the criticism of a corporate media intent on demeaning and discouraging the movement. Enough of the obtuse pretense that these protesters do not have a message. They may have  different ways of coming to that message, and many to be sure may not be media savvy when mocked or condescended to by right-wing hosts or reporters, but their individual voices rose up this night in a deafening chorus.

But the movement’s message goes far beyond words. In action and practice it is a fundamental assertion of what the Constitution promises, but cannot guarantee without the active participation of citizens, which lies at the core of the argument. Despite the supreme court’s ruling that Corporations are a person, the difference is that they cannot be a citizen-a difference this movment is defending and asserting. 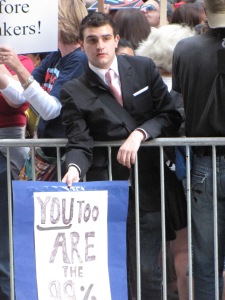 Each night, and in all the cities and towns of this nation, the Occupy movement meets in a citizen’s congress to discuss and strategize. In Chicago, a nightly meeting is held in the park at Congress Parkway and Michigan Avenue. This is the practical example of President Obama’s  platform of Change.

“We are” said Medea Benjamin of Code Pink, on WCPT this morning, “being the change we want to see.”

W.C. Turck is a Chicago playwright and the author of four widely acclaimed books.His latest is "The Last Man," a prophetic novel of a world ruled by a single corporation. His first novel, "Broken: One Soldier's Unexpected Journey Home," was reccommended by the National Association of Mental Health Institutes. His 2009 Memoir, "Everything for Love" chronicled the genocide in Bosnia and the siege of Sarajevo. His third book "Burn Down the Sky" is published exclusively on Amazon Kindle. It was in Sarajevo at the height of the siege where he met and married his wife, writer and Artist Ana Turck. FOX NEWS, ABC, CBS News, the Chicago Tribune and The Joliet Herald covered their reunion after the war. He helped organized relief into Rwanda during the 1994 genocide. Turck has been a guest on WMAQ-TV, WLS in Chicago, WCPT, WBBM radio, National Public Radio, Best Of the Left and the Thom Hartmann show. He has spoken frequently on Human Rights, Genocide and Nationalism. In 2011, his play in support of the Occupy Movement, "Occupy My Heart-a revolutionary Christmas Carol" recieved national media attention and filled theaters to capacity across Chicago. He remains an activist to the cause of human rights and international peace. END_OF_DOCUMENT_TOKEN_TO_BE_REPLACED
This entry was posted on Tuesday, October 11th, 2011 at 1:39 pm and tagged with Ana Turck, Chicago, code pink, conservative, Constitution, Culture, Economy, Everything for Love, FOX News, gay marriage, glenn beck, government, hal sparks, history, http://www.ustream.tv./channel/halsparkslive, human rights, liberal, Love, medea benjamin, media, Mortgage Banker’s Association, Obama, occupy chicago, Occupy Wall street, Politics, postal workers, progressive, racism, randi rhodes, relationships, religion, republican, rick perry, rick perry for president, rush limbaugh, society, Stand up chicago, stephanie miller, steve jobs, tea party, teachers union, terrorism, texas, The Hal Sparks Radio Program (megaworldwide, thom hartmann, W.C. Turck, wcpt and posted in Uncategorized. You can follow any responses to this entry through the RSS 2.0 feed.
« Occupy Chicago: Who really owns the streets?
Breaking News: Michelle Bachman to show nipple on Bloomberg debate »