Brushes with a Balkan warlord

By spring of 1994 I was back in the Balkans, my second trip to the war in Bosnia. Each time I went purposely to Serbia’s capital, Belgrade to challenge the Western media’s alleged bias against the Serbs. To be sure, and that was my assessment even then, the Serbian government, with both tacit and explicit support of the majority of Serbs, bore the lion’s share of responsibility for the violence and atrocities in the embattled former-Yugoslav republics. Not completely, but they controlled the vast majority of Yugoslav arms and had perpetrated the vast majority of the brutality against Croat and Bosniak former countrymen. Were there justifications? Sure.

But justifications are excuses and not at all consistent with morality and human rights. As a nation, the Serbs were wrong. A great many Serbs I met, however, did not support nor subscribe to their government and the nationalist fervor blinding Serbia’s national soul. 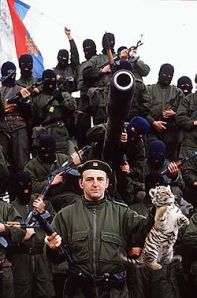 Arkan and his so-called Tigers

Few during the conflict embodied the genocide in Croatia and Bosnia like the Serbian warlord, Zeljko “Arkan” Raznatovic. I was well acquainted with his resume as an assassin for the pre-war Yugoslav government, and then a bank robber wanted by Interpol. When the war in Croatia began, Arkan’s militia, the so-called, “Tigers,” grown from Serbian special forces and hardened criminals, distinguished themselves against poorly armed and poorly trained Croats and against villagers and unarmed civilians. An agreement to split war booty with the Belgrade government opened the door for wholesale genocide in Croatia and Bosnia driven by sheer greed. Arkan seemed bigger than life. Belgrade friends were terrified even to whisper his name in public, a strayed from conversation even in private.

It was a warm spring that year in Belgrade. Exploring the city and countryside by day, I would retire to a cafe at the Hotel Slavija, overlooking a bustling park and roundabout,  with food kiosks to one side and the unending theater of an amazing and vibrant city. Catching up in my journal, I’d have a beer or two before returning to my room at the Park Hotel. The war in Bosnia was heating up. A few weeks earlier a Serb shell killed scored is a Sarajevo market. I was anxious about venturing into the war zone again.

This time I was travelling with a heavy Kevlar police vest, considered contraband in Serbia and Bosnian Serb territory, just as my cameras and film were as a foreigner. For a couple of weeks prior to the trip I’d taken the advice of a cop friend back in Chicago. To acclimate to the weight and heat I started jogging in the vest. To acclimate myself to fear, I jogged through the Cabrini Green house project, then won of the worst crime-ridden neighborhoods in the country.. I was well acquainted with gangs and knew gang members. It all seemed good preparation for the Balkans.

One evening at the cafe in Belgrade several armed bodyguards in track suits appeared, carefully casing the place as they scowl and circulated through the tables. A moment later Arkan arrived, with some over-made debutante on his arm and yet another weasle-y looking bodyguard, in the ubiquitous track suit that was about a size and a half too big. They decided on a nearby table, the previous patrons scurrying away to another table.

I was stunned. Here was a man rendered bigger than life. painted as a legend in Serbia, and a monster elsewhere, his face plastered across city walls as part of a parliamentary bid, I expected, well, something more. Instead, I found a man exceedingly average in every respect. He wore a big cross around his neck, which he’d famously bragged once about how he was a great Christian. I think he believed it. I recall a vacuous nature to the man when our eyes met briefly. Morality was obviously an unnatural concept to him. Self-serving pragmatism was his singular motivation. I couldn’t help  a smile at the thought that his bodyguards, one of whom I recognized from war images, appeared so little and inconsequential.

Placed in any tough neighborhood back home, these men would be eaten alive and spit out without any more consideration. They weren’t a militia. They were a gang, and Raznatovic their pallid sovereign. The reputation came in the unblinking brutality of their actions; heavily armed thieves and bullies and thugs. There wasn’t the slightest remorse when I learned in January 2000 he’d been assassinated, shot in the eye, likely to keep him from testifying against President Milosevic. He might have stood trial for the thousands he butchered, but then again fate and justice rarely write the world we wish to see, but only the world that is.

W.C. Turck is a Chicago playwright and the author of four widely acclaimed books.His latest is "The Last Man," a prophetic novel of a world ruled by a single corporation. His first novel, "Broken: One Soldier's Unexpected Journey Home," was reccommended by the National Association of Mental Health Institutes. His 2009 Memoir, "Everything for Love" chronicled the genocide in Bosnia and the siege of Sarajevo. His third book "Burn Down the Sky" is published exclusively on Amazon Kindle. It was in Sarajevo at the height of the siege where he met and married his wife, writer and Artist Ana Turck. FOX NEWS, ABC, CBS News, the Chicago Tribune and The Joliet Herald covered their reunion after the war. He helped organized relief into Rwanda during the 1994 genocide. Turck has been a guest on WMAQ-TV, WLS in Chicago, WCPT, WBBM radio, National Public Radio, Best Of the Left and the Thom Hartmann show. He has spoken frequently on Human Rights, Genocide and Nationalism. In 2011, his play in support of the Occupy Movement, "Occupy My Heart-a revolutionary Christmas Carol" recieved national media attention and filled theaters to capacity across Chicago. He remains an activist to the cause of human rights and international peace. END_OF_DOCUMENT_TOKEN_TO_BE_REPLACED
This entry was posted on Tuesday, September 27th, 2011 at 5:40 pm and tagged with Ana Turck, bosnia, Chicago, Constitution, Europe, Everything for Love, glenn beck, government, history, human rights, liberal, Love, Politics, progressive, racism, randi rhodes, relationships, religion, republican, rush limbaugh, sarajevo, society, stephanie miller, tea party, terrorism, the Hague, thom hartmann, travel, W.C. Turck, war and posted in Uncategorized. You can follow any responses to this entry through the RSS 2.0 feed.
« I want a Black friend, but one just like me.
Truth and Lies: Musings from the bike trail »