What do Republicans and Democrats have against innocent little Frogs???

Seriously. Both sides are using these cute little amphibians in a cruel analogy meant to demonize each others insidious ideologies. And it’s got to stop before some crazy whack-job on one or both sides commits a terrible act of frog-abuse. Dear god, can we back off the rhetoric that only encourages violence against our pond-dwelling friends? When does it end? When Kermit is floating face down in a bubbling cauldron? Doesn’t anyone think of the tadpoles?

And its always frogs. Why, because their dumb? That sort of broad generalization sounds a bit to me like, well, Amphipianism. Aside from just assuming that all frogs like water. You probably just assume that all of them live in swamps, right? I think that says far more about you than frogs. What about tree frogs, or toads? Seems dangerous and bigoted to paint all frogs with the same brush.

But why frogs? Because with those little forearms they can’t fight back very well? No teeth to bite, just that annoying sticky tongue?, or because their legs are delicious fried with a bit of garlic butter? No one ever says, drop a raccoon in water, or a gibbon or a gila monster. They wouln’t take that crap! 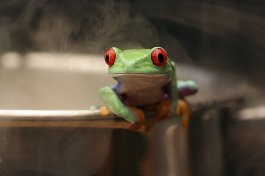 Maybe frogs are just too nice for their own good.  Pitted against mean Dems and Republicans, easily 140 times their size, who have the advantage of knowing how to work a stove, the frogs just don’t stand a chance.

Certainly some sort of legislation is needed for those tempted to use sauce pans for misbegotten purposes. Should everyone simply be allowed to weild these as a weapon in the proximity of our cold-blooded little friends? Maybe a 10 day waiting list to purchase pans to allow the anti-frog sentiments to dissipate? Or perhaps no sauce and simmer pans within a 1000 yards of a pond or leafy-dewey garden. Do I even need to mention the horrible images evoked by the mention of a double boiler?

I say that if Progressives and Conservatives can’t agree to protect even a little frog in boiling water, if they are that mean and cold-hearted what chance do the rest of us have? So I am calling for a Constitutional convention for an Ammendment to protect the Right’s of frogs. The least among us, right? What would Jesus do? Is anyone thinking of the tadpoles?

W.C. Turck is a Chicago playwright and the author of four widely acclaimed books.His latest is "The Last Man," a prophetic novel of a world ruled by a single corporation. His first novel, "Broken: One Soldier's Unexpected Journey Home," was reccommended by the National Association of Mental Health Institutes. His 2009 Memoir, "Everything for Love" chronicled the genocide in Bosnia and the siege of Sarajevo. His third book "Burn Down the Sky" is published exclusively on Amazon Kindle. It was in Sarajevo at the height of the siege where he met and married his wife, writer and Artist Ana Turck. FOX NEWS, ABC, CBS News, the Chicago Tribune and The Joliet Herald covered their reunion after the war. He helped organized relief into Rwanda during the 1994 genocide. Turck has been a guest on WMAQ-TV, WLS in Chicago, WCPT, WBBM radio, National Public Radio, Best Of the Left and the Thom Hartmann show. He has spoken frequently on Human Rights, Genocide and Nationalism. In 2011, his play in support of the Occupy Movement, "Occupy My Heart-a revolutionary Christmas Carol" recieved national media attention and filled theaters to capacity across Chicago. He remains an activist to the cause of human rights and international peace. END_OF_DOCUMENT_TOKEN_TO_BE_REPLACED
This entry was posted on Saturday, September 10th, 2011 at 1:21 pm and tagged with Ana Turck, bosnia, Chicago, comedy, conservative, Constitution, cooking, Culture, Economy, Everything for Love, frogs, glenn beck, Global warming, government, history, human rights, liberal, Love, media, Obama, Politics, progressive, racism, randi rhodes, relationships, religion, republican, rick perry, sarajevo, society, stephanie miller, tea party, terrorism, texas, thom hartmann, travel, W.C. Turck, war and posted in Uncategorized. You can follow any responses to this entry through the RSS 2.0 feed.
« September 11 Recollections #3
Excerpt from my new upcoming e-novel: Emmetsburg »