Loneliness: The most powerful photo I’ve ever taken 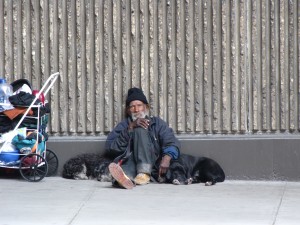 The other day hurrying to work I nearly missed him. He was sitting along the wall beside the AT & T building in Chicago’s Loop, stoic and still among rushing throngs of office workers. To either side were his two dogs, A cart with the man’s world belongings were beside him.

I don’t know his story or where he came from, and I have not seen him since. It was a moment in which the paths of our lives crossed for a perfect and powerful moment. 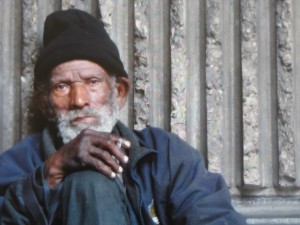 What I find in looking at this man becomes less of a narrative about him as it is an insight to my own heart. Still, it is impossible to escape the torture of his eyes, one that speaks to pain and lonesomeness. In that face are a thousand stories and possibilities. Perhaps he ran afoul of the law when he was young, or made poor choices in life that brought him to this place. Maybe it was drugs or alcohol, or even mental illness. Maybe it was none of these things. Life can bring any soul to the precipice of despair. Not everyone comes to that fight with the same strengths. Some are crushed under the weight. I have felt that strain before. I have people who love and support me. Those blessings are simply not the case for all of us.

There is a certain wisdom tinged with exhaustion in his eyes that suggests at a life of tough breaks and  a lack of family and support. It could well have been an illness or the loss of someone close that he could not recover from. In the end, the story one makes about the man tells more about them than about him.

One thing that is without question is the loneliness in his stare. The dogs are his companions and family, but there is little to suggest in the evidence that the story of their shared lives will end happily. And that is where I will leave it…

W.C. Turck is a Chicago playwright and the author of four widely acclaimed books.His latest is "The Last Man," a prophetic novel of a world ruled by a single corporation. His first novel, "Broken: One Soldier's Unexpected Journey Home," was reccommended by the National Association of Mental Health Institutes. His 2009 Memoir, "Everything for Love" chronicled the genocide in Bosnia and the siege of Sarajevo. His third book "Burn Down the Sky" is published exclusively on Amazon Kindle. It was in Sarajevo at the height of the siege where he met and married his wife, writer and Artist Ana Turck. FOX NEWS, ABC, CBS News, the Chicago Tribune and The Joliet Herald covered their reunion after the war. He helped organized relief into Rwanda during the 1994 genocide. Turck has been a guest on WMAQ-TV, WLS in Chicago, WCPT, WBBM radio, National Public Radio, Best Of the Left and the Thom Hartmann show. He has spoken frequently on Human Rights, Genocide and Nationalism. In 2011, his play in support of the Occupy Movement, "Occupy My Heart-a revolutionary Christmas Carol" recieved national media attention and filled theaters to capacity across Chicago. He remains an activist to the cause of human rights and international peace. END_OF_DOCUMENT_TOKEN_TO_BE_REPLACED
This entry was posted on Wednesday, July 13th, 2011 at 5:55 pm and posted in Uncategorized. You can follow any responses to this entry through the RSS 2.0 feed.
« Srebrenica:Bosnia’s 9-11 all but forgotten
Big government? Damn right. The biggest! Just fix it. »

2 responses to “Loneliness: The most powerful photo I’ve ever taken”