My stomach muscles were sore. The day  after the white-knuckle race down the Autostradafrom Bologna, it felt like I’d done a thousand crunches. I’d been gripping the wheel and tightening my gut for that long. I’d driven all over Europe, from Belgium to Bosnia, but Italy was an entirely different traffic animal. It was still all a blur. A part of me was thankful just to have survived. Another part of me was screaming, hell yeah, let’s do it again! 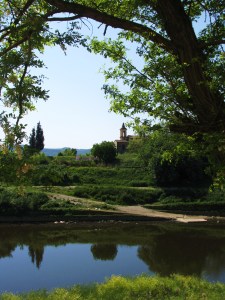 The Arno River at Empoli, Tuscany

It’s just the pattern of life, that’s all. Every pl ace has its own flavor, which is what makes travel so damn interesting. We could have taken a train. Friends who’d been through Italy warned me that driving was absolutely insane. We  could have flown from Venice to Florence and tak en the train to Montelupo and Capraia, but that wouldn’t do. Its sort of like looking in a window at something delicious to eat and actually eating it. Sometimes you have to just jump right in, and learn to overcome the fear, right? I mean, what keeps us from really chasing those dreams and fantasies we entertain to ourselves but fear?

the next morning, as we pulled out of the hotel I was eager to drive. I’d abandoned any fear, said to hell with it over the Italian culture of tailgating, the mysterious rhythm of roundabout with minimal use of brakes and breakneck speeds through narrow European streets. I’d master driving in Italy, as good as any native. I was ready for adventure and would not be deprived.

“You’re enjoying this, aren’t you?’ remarked Ana, as I deftly navigated a busy roundabout. Finding a hole and tucking in, I only briefly considered the brake pedal, then abandoned the idea.

“Here’s the key to driving in Italy,” I replied. “No rules.”

Really, there are a thousand web sites with advice about Italian traffic laws, but none of them, not a single one will ever impart this bit of advice about  driving in Italy. They will warn you about the stiff cost of  Italian fines, charged on the spot…not true. Italian driving is, well, in a word-freedom.

In the states we love our very precise traffic laws. Great to know, and great as a template, but when driving in Italy throw it all out the window. Like real freedom, driving in  Italy is a negotiation. Its a negotiation between those around you and  what you can get away with. Right? And I was loving it. I was loving every minute, with the warm Mediterranean wind through the window, Ana and a venetian singer named Gerardo Balestieri in the CD player, Ifell into the rhythm of the traffic and countryside. 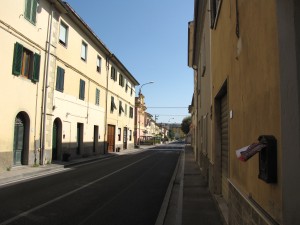 Negotiating narrow Tuscan streets, the key to driving in Italy is an essence of freedom

I have a talent for  directions, when I’m in the flow of things. Despite getting turned around the night before I’d found myself again. as we mirrored the Arno River through the heart of Empoli my hand fell upon Ana’s knee. I’d resolved to give her a trip through Tuscany to remember. As we left the town for the hills and back roads and small towns, headed loosely in the direction of Vinci, the birthplace of Leonardo d’Vinci, we were well on our way!

W.C. Turck is a Chicago playwright and the author of four widely acclaimed books.His latest is "The Last Man," a prophetic novel of a world ruled by a single corporation. His first novel, "Broken: One Soldier's Unexpected Journey Home," was reccommended by the National Association of Mental Health Institutes. His 2009 Memoir, "Everything for Love" chronicled the genocide in Bosnia and the siege of Sarajevo. His third book "Burn Down the Sky" is published exclusively on Amazon Kindle. It was in Sarajevo at the height of the siege where he met and married his wife, writer and Artist Ana Turck. FOX NEWS, ABC, CBS News, the Chicago Tribune and The Joliet Herald covered their reunion after the war. He helped organized relief into Rwanda during the 1994 genocide. Turck has been a guest on WMAQ-TV, WLS in Chicago, WCPT, WBBM radio, National Public Radio, Best Of the Left and the Thom Hartmann show. He has spoken frequently on Human Rights, Genocide and Nationalism. In 2011, his play in support of the Occupy Movement, "Occupy My Heart-a revolutionary Christmas Carol" recieved national media attention and filled theaters to capacity across Chicago. He remains an activist to the cause of human rights and international peace. END_OF_DOCUMENT_TOKEN_TO_BE_REPLACED
This entry was posted on Thursday, May 26th, 2011 at 2:01 am and posted in Uncategorized. You can follow any responses to this entry through the RSS 2.0 feed.
« Travels in Tuscany: Happy Hour, Tuscan style
Serbian War Crimes: Mladic arrest not the end of the story »